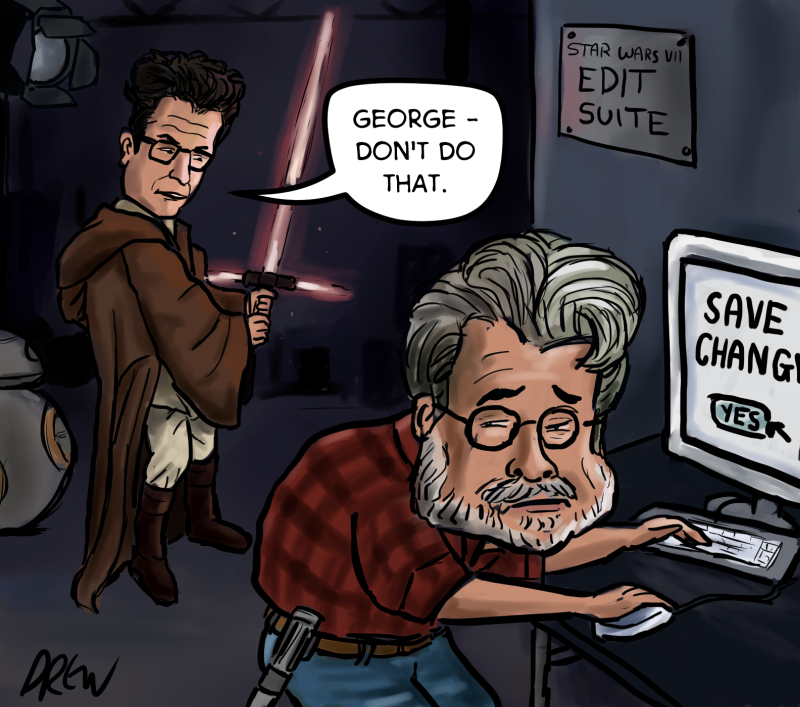 As Star Wars VII (The Force Awakens) is readied to be released I imagine J J Abrams patrols the corridors trying to stop this sort of scenario where a rogue Jar Jar Binks may be added or other unnecessary CGI.  I do have hope for Star Wars VII but anyone who lived through the Phantom Menace has been scarred and is just holding back until we see it.

I have done other cartoons about Star Wars VII including the Spheros BB8 toy and the state of the corridors in the mucky Millenium Falcon.
Posted by idrew at 16:34 0 comments

The Terrifying Tale of the Costume and the Artist Dad 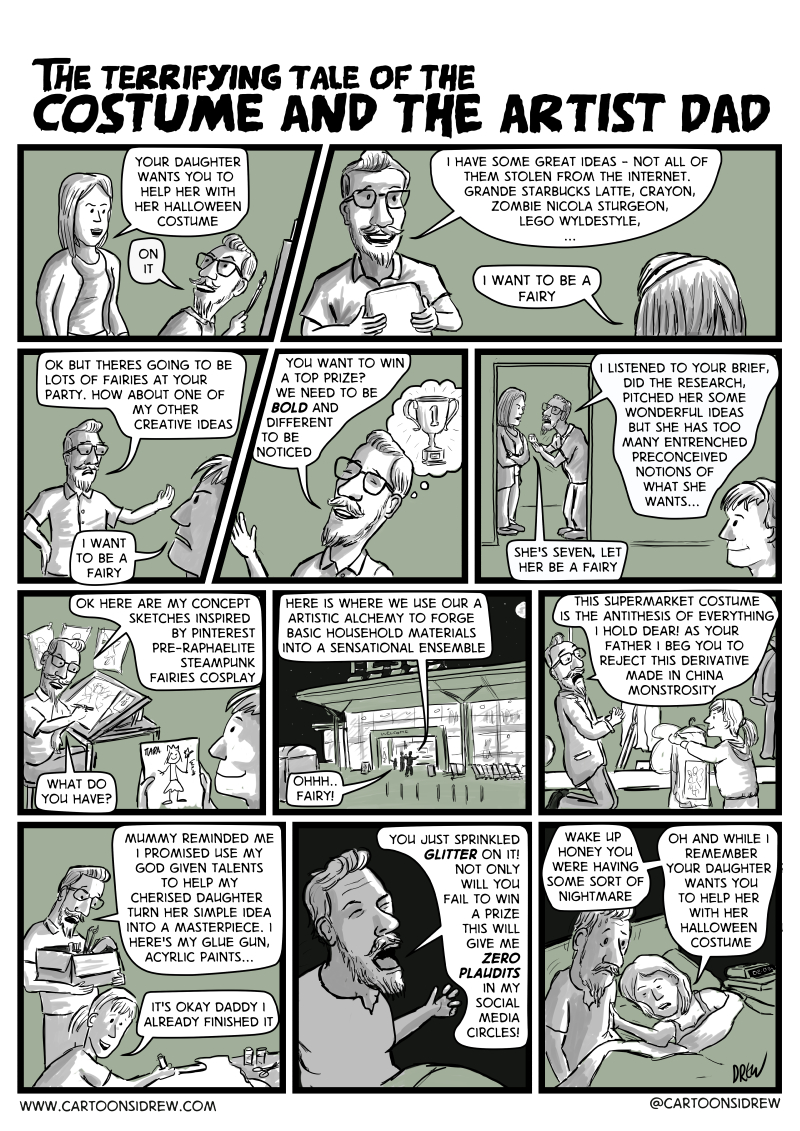 Here is the scariest tale I could imagine as a creative based on my experience of trying to steer my children towards what I would like to make so I can share it on social media.

If you liked this story you may like Kitchen Ronin the story of Samurai kitchenware.
Posted by idrew at 10:34 0 comments

Back To The Future Day Part Two 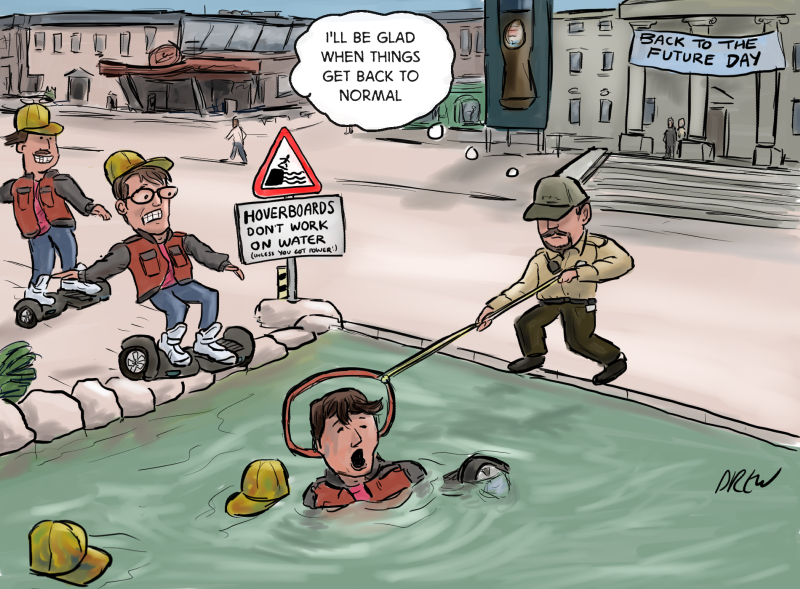 Here comes the sequel to my Back To The Future Day cartoon for the CCGB competition.  I'm hoping BTTF buffs get the references and it gave me a chance to sketch the current state of the art hover boards which don't hover (the ones that do actually hover need a certain surface to hover over).
Posted by idrew at 23:53 0 comments

Back To The Future Day 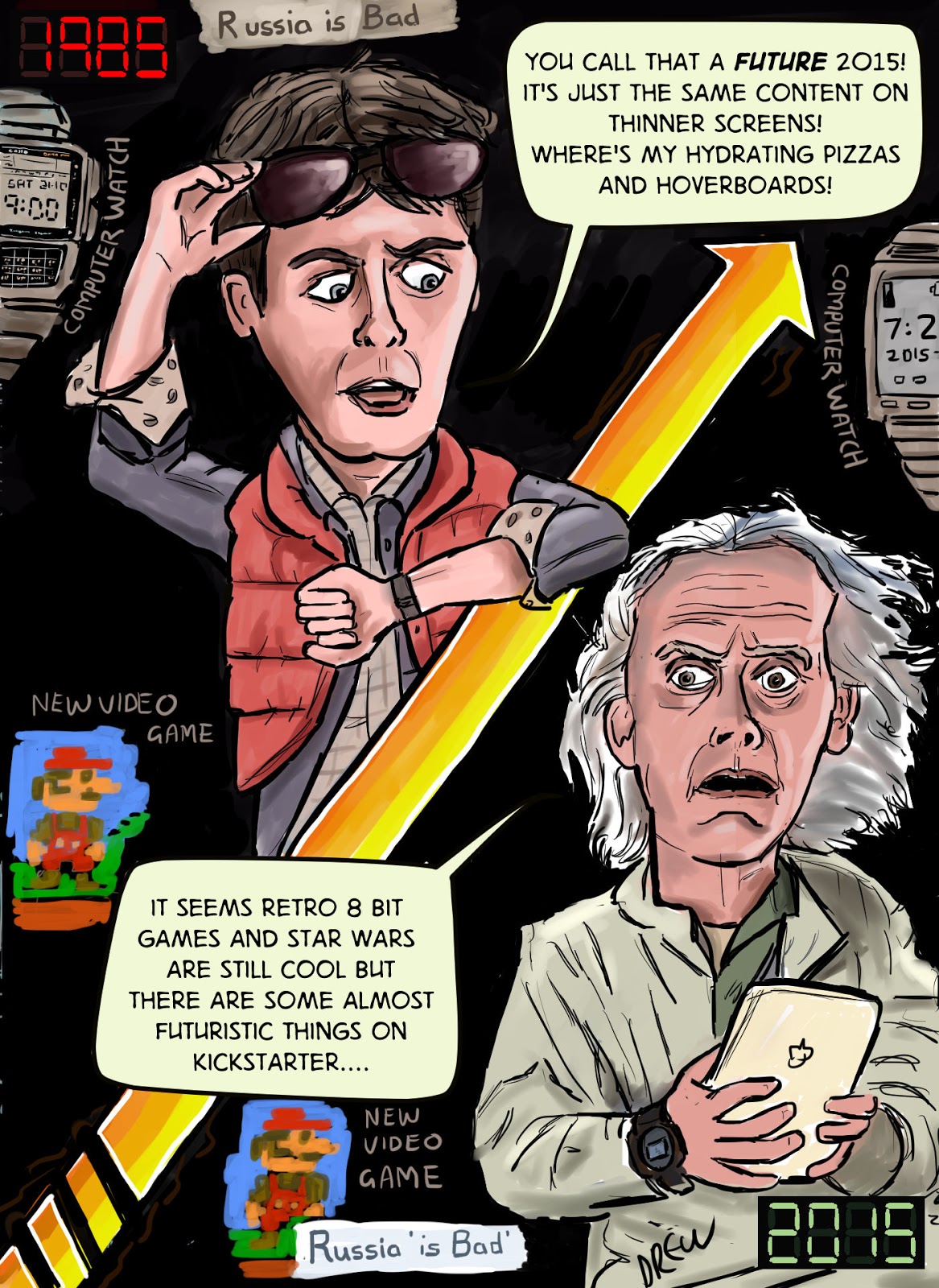 21st October 2015 is Back To The Future day the day in Back To The Future II that Marty McFly and 'Doc' Brown  go to in the future from 1985 in their 88mph DeLorean.
It's also a day the media and Internet care about as they can run stories about how the predicted future doesn't quite marry up to reality (except in Kickstarter).
I was 16 (only one year behind the age Marty McFly was meant to be) when BTTF2 came out and so I take future they painted as a sort of promise to my generation.  Where are our hoverboards that fly anywhere?  Where are our flying cars and hydrating pizzas.  Back in the 1980s I had a watch with a computer in it a Casio calculator watch which I accidentally took into my Arithmetic O-Grade exam so I can hardly imagine that Apple iWatch is the pinnacle of what we can achieve as a technological society.  Back in 1985 the seminal Super Mario Bros was released and 30 years on I'm still playing 8-bit retro games like Crossy Road, Terraria and now they've released Mario Maker.  At least in the 1980s we were coming out of a Cold War with Glasnost and the Berlin Wall coming down now we've heading in the opposite direction.
Still I enjoyed Back To The Future and unlike most people I've spoken to I even enjoyed Back To The Future III perhaps because I saw it with three generations of Frasers.
Happy Back To The Future day when the right Pacific time zone rolls around.
Posted by idrew at 23:39 0 comments 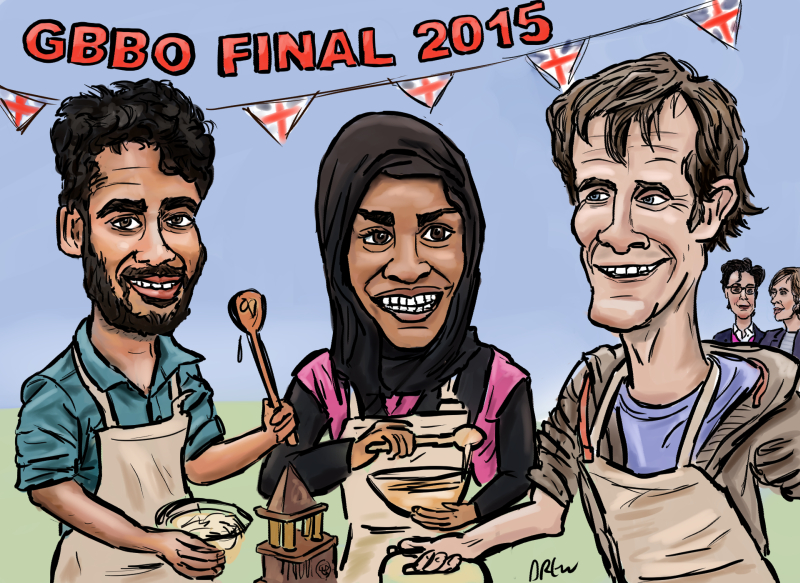 I know it's finished now but I wanted to post my GBBO final caricature here with Dr Tamal, deserved winner Nadiya and "new man" Ian who has the same hair style as me.

Holidays in the 21st century invariably lead to complaints of lack of Wi-fi, TVs with too few channels and a general lack of home comforts when we arrive at our destinations.  Me I like buckets and spades as much as I love tablets and computers.
Posted by idrew at 09:22 0 comments

Curiosity and water on Mars 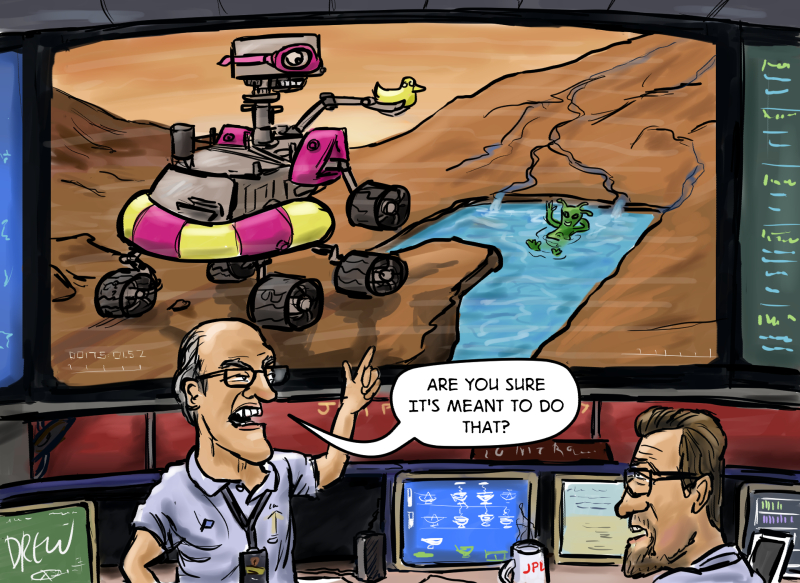 Last Monday NASA announced they had found evidence of liquid water flows on Mars today and being a lazy topical cartoonist I have drawn something nearly a week later.

What NASA announced after teasing a "major mystery" of Mars had been solved is strong evidence that dark streaks on the surface are likely caused by seasonal flows of water.

This was discovered by studying dark streaks on slopes (known as "recurring slope lineaeae" or RSL) that were seen to come and go in the Martian summer.  The Mars Reconnaissance Orbiter used its Crism instrument to analyse the chemistry of these streaks using spectroscopy and detected hydrated salts.  So not direct detection of water but a strong indication that salty water is flowing on Mars.

However NASA's Curiosity Rover won't be heading over to investigate because even if it could climb the steep slopes it has not been sterilised to the correct degree to be allowed into any areas where life could exist for fear of contamination.  So the scenario painted in this cartoon will probably not be allowed if there was deep water, aliens and a supply of swimming aids on Mars.

If you liked this cartoon I have had other space toons on the reality show that is Mars One, Voyager 1 not leaving the Solar System and the future of NASA's manned spaceflight.
Posted by idrew at 00:37 0 comments