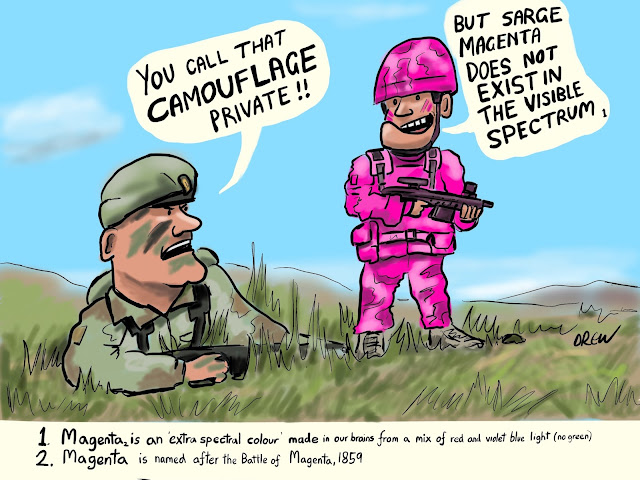 I enjoy learning new facts.  While researching cartoons you often learn interesting things like the origins of the lemmings myth.

The colour collective this week was using the colour magenta which a quick google revealed was named after the 1859 battle of Magenta in the Second War of Italian Independence (previously it was called fushsine).
This lead me down the path of drawing something about the battle but given it was a pretty bloody affair it didn't seem ripe for comedy which lead me to a second fact...

Magenta isn't in the visible spectrum, it isn't there in the rainbow when we sing 'Red, Yellow, and Green and Blue...'.  It is an extra-spectral colour (together with pink, beige and anything on the greyscale).  There is no magenta light which can lead to clickbait titles like 'Magenta doesn't exist!' or 'Magenta isn't a colour', given given you can see it there is more nuance than that.

The colour magenta is composed in your brain using inputs from your eyes which have cone receptors for  Red, Blue and Green.  Magenta isn't one colour it's a mixture in our brains of Red, Blue and no Green so it really is a pigment of our imagination and only perceived psychologically.

However you can argue that all colour is perceived psychologically which explains colour blindness and animals with different perception (the Mantis Shrimp has 12 colour receptors to our 3).

All of which lead to this cartoon about camouflage.
Posted by idrew at 01:57 1 comments 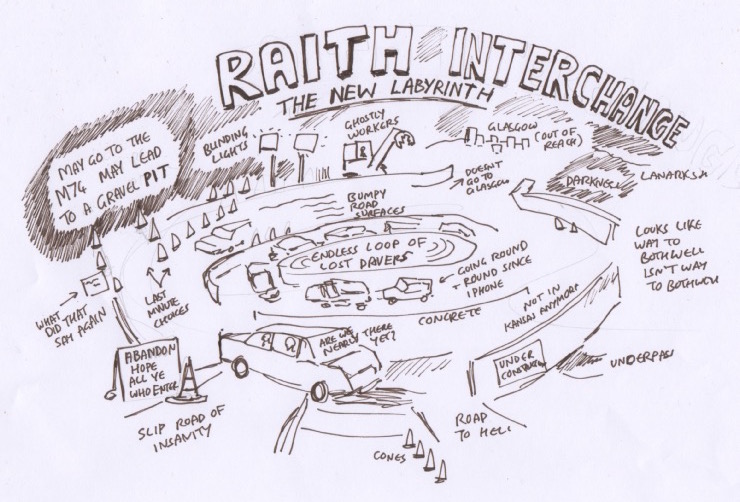 The Raith Interchange is a nightmare labyrinth that I was stuck in the other day (even though I used it know it well from my Holytown days).  I channelled my frustration/fury into a cartoon that struck a chord and was shared a lot round my neck of the woods so much so that the Hamilton Advertiser wrote a story about it http://www.dailyrecord.co.uk/news/local-news/raith-interchange-cartoonist-andrew-fraser-9018325

The funny thing on reflection about the Internet world is that you can spend hours on what you think is a great masterpiece only to have it sink away unnoticed in the great stream of social media or you can doodle a lucky 15 minute sketch (it may have been even quicker than that) and it gets more attention than you imagine.

However I am still avoiding the Raith Interchange until people tell me it is all sorted.
Posted by idrew at 15:02 0 comments