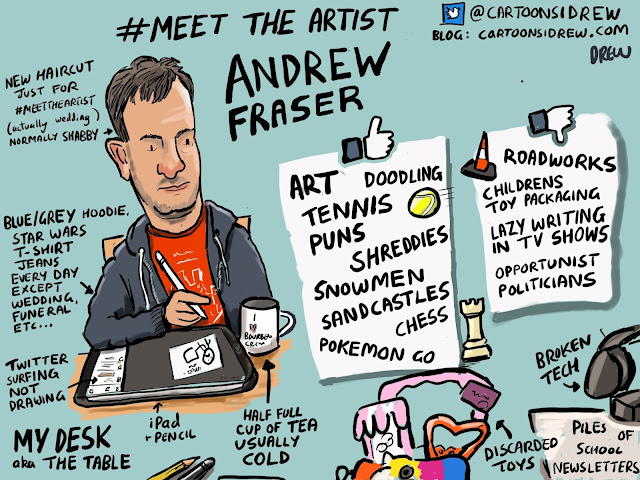 This is me, Andrew Fraser, or at least my #meettheartist picture.  I am a cartoonist/artist who currently lives in Glasgow and has been doodling since I was a kid.

I've always been a compulsive doodler back from when I was in primary school trying to copy Charles Shultz's Peanuts characters, or Jim Davies Garfield strips moving onto drawing cartoon strips to amuse my friends.  At university when I studied IT and Electrical Engineering I used to pass the time in lecture doodling all over my lecture notes, which carried onto doodling in meetings when I got an IT job.

I started cartoonsidrew my cartooning blog back in 2010 shortly after my first child was born when I discovered I didn't have much time to do produce great works of art, but I could still easily knock out a cartoon in an evening and share it on a blog/Facebook.  Despite the fact that no-one outside my parents and a few others ever call me Drew, I have always used this as my signature because it seemed snappy and I discovered several other cartoonists called Andrew Fraser.

I love competitions and art challenges from all the challenges on the CCGB Public Forum to various Twitter hashtags run by Studio Teabreak (Sarah McIntyre) and others.

I have been published in the UK satirical magazine Private Eye, reprinted in The Week and featured in a couple of other newspapers including the Hamilton Advertiser.  I have worked with Hibernian FC, Scholastic and individuals who want caricatures for big birthdays or leaving does.  I am a member of the Cartoonist Club of Great Britain (CCGB) and the Professional Cartoonists Organisation (PCO).

While I started out with pen and pencil I currently draw digitally on an iPad Pro using Procreate although I do still sometimes get the urge to break out the pens.

If you have a query or project in mind you can contact me via email (info@cartoonsidrew.com) or on Twitter (@cartoonsidrew).  I also exist on Facebook, Tumblr and Instagram.  I also have a separate portfolio site andrewfraser.art