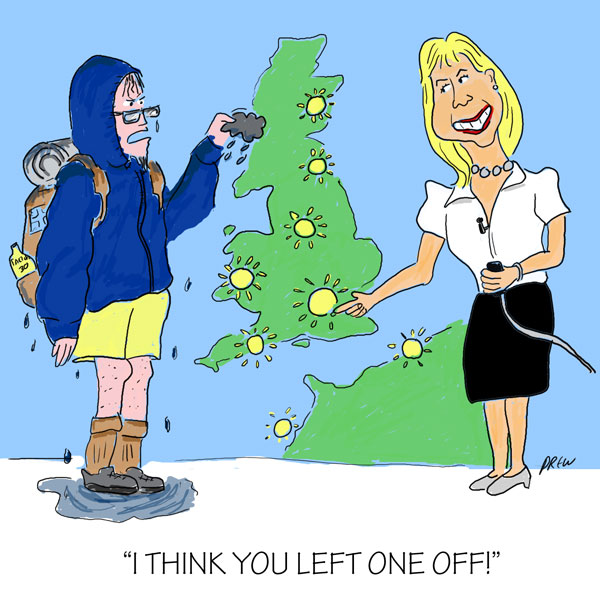 This one's for the CCGB caption compedition but I think I'll won't Facebook it until one of those days where Radio 2/3/4 are declaring what a glorious sunny day it is across the UK apart from Glasgow.
Posted by idrew at 13:58 0 comments 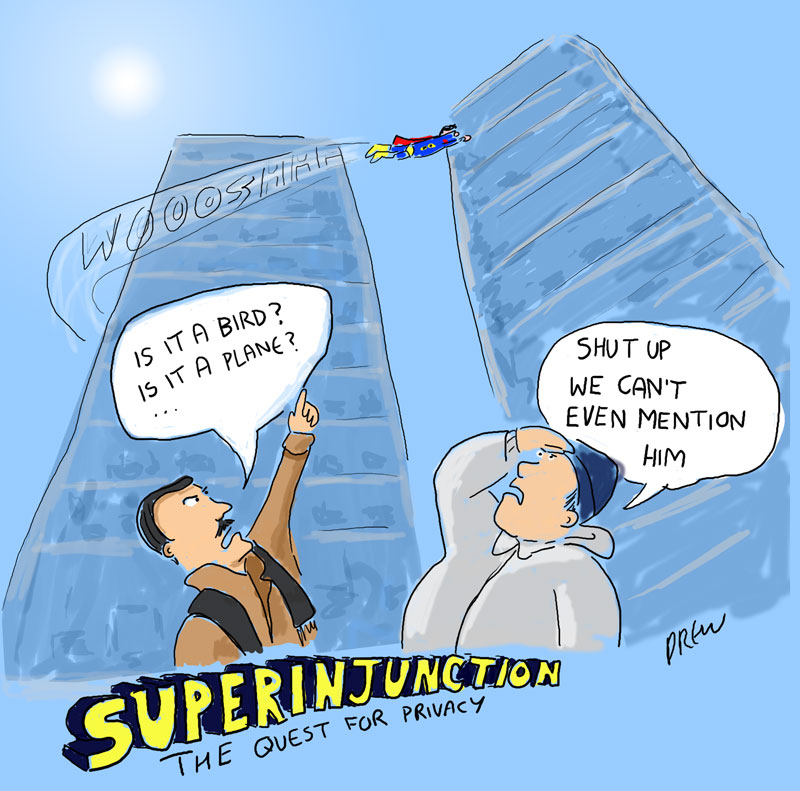 Back from my Easter break with a cartoon about Superinjunction the secretive superhero who everyone knows exists but we have to keep his identity secret or get locked up.

Super-injunctions is that what judges really call them or it is just media spin?  I can't imagine a top judge saying "Mr Unfaithful Footballer, you already have an injunction but now I'm going to grant you a SUPER-injunction.!!"

For those who want background on superinjunctions here is a BBC article http://www.bbc.co.uk/news/uk-13145457
Posted by idrew at 14:24 0 comments

Above is everything you need to know about Schrodinger's Cat in a (cartoon) box.  Actually the Wikipedia article is probably more revealing.  I did lots of Physics at secondary school and then went on to University where they told you that all that classical Newtonian laws of gravity was okay for kids but there was this bloke called Einstein who had some special relativity and also some more complicated general stuff.    Alongside that was Quantum Physics and the famous (thought) experiment Schrodinger's Cat.

There's a scientist who puts a cat in a box with a quantum device that has a 50/50 chance of killing the cat.  While the cat in is the box he doesn't know if it is dead/alive or in some quantum half-dead/alive state until he looks inside.  For a better description read the BBC h2g2 article.

The cartoon is for the CCGB's weekly contest.  The physicist in me may have clouded my cartoon judgement as I had other possibly funnier ideas but it scored points which is better than last weeks.
Posted by idrew at 13:32 0 comments

The Wonders Of Human Spaceflight 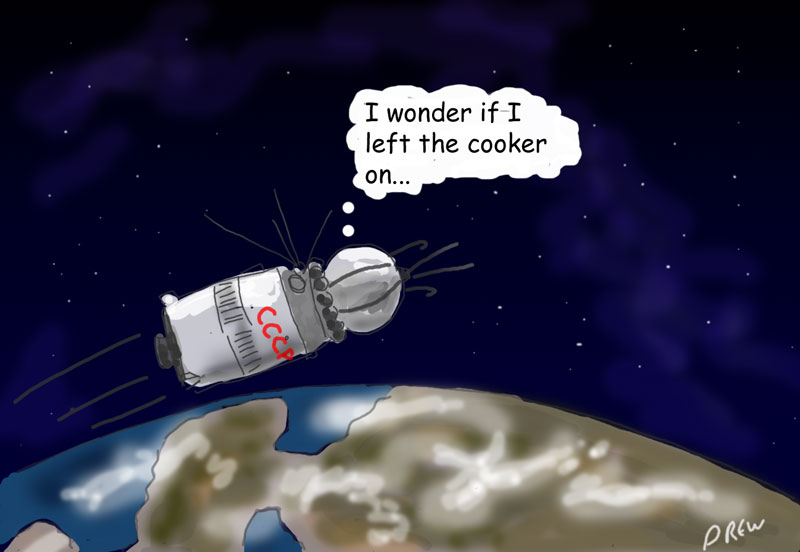 Todays cartoon marks the 50th anniversary of the first manned spaceflight by Yuri Gagarin onboard Vostok 1 in 1961.

We tend to think of this event as part of the narrative of the Space Race: "There's Sputnik, Russia's in the lead, they have a man in space, Russia way out in front, America's catching up, America's got Apollo they're drawing level, they landed on the moon - Hurray the WEST HAS WON!!".  This view downplays the contribution of what was then the Soviet Union which should be looked at again now the Cold War is over and we're not worried about being too nice to communists.

Regrettably I missed all this by not being born.  I grew up wanting to be an astronaut with the great stories and pictures I saw together with the souvenirs of my dads trip to Cape Canaveral but no space achievements of my own era to celebrate except boring space stations and Shuttle disasters.

To commemmorate the event I wanted to give my cartoon a Russian caption with the translation "I wonder if I left the cooker on" or something similar.  However I don't trust online translators enough and couldn't find a friend who spoke Russian in time,  If anyone who speaks Russian wants to offer a caption in the comments (and we do get visitors from ru) then you can be part of this cartoon/post.

Thank you CCCP and Yuri Gagarin, without your efforts we wouldn't have got as far in space as we are today.
Posted by idrew at 14:47 1 comments 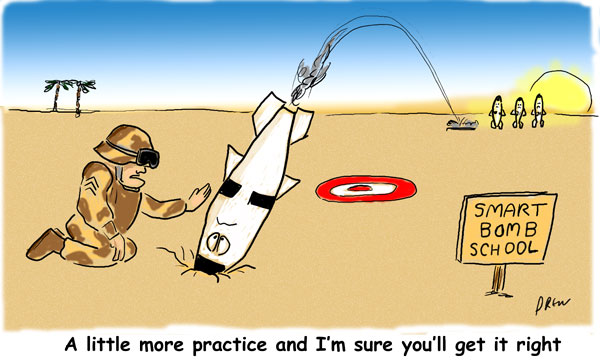 There are smart phones and smart cards but smart bombs?﻿  I've been avoiding the whole Libyan military conflict but then I needed material for this weeks cartoon compedition so then I drew one about smart missles and then concerned with actual events on the ground watered it down to produce this one.
It got zero point in the compedition.
Posted by idrew at 13:20 0 comments 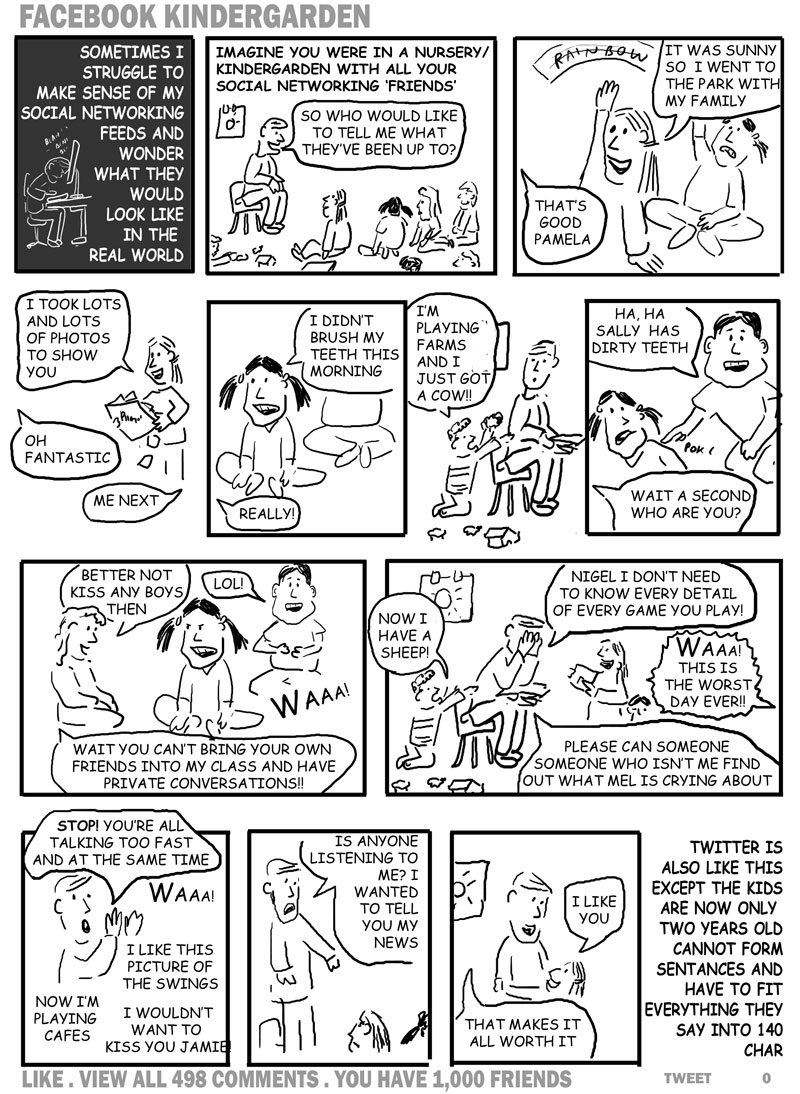 To all my Facebook friends I still love you - it's just have you ever wondered how natural Facebook conversation is.  You wouldn't have a conference phone call with all your friends at the same time but that's what Facebook feels like sometimes.  If you have even a moderate amount of friends it's hard sifting through the feeds to find the interesting morsels of what is really going on with folk.

UPDATE: The intention of this cartoon seem to confuse some folks who couldn't tell if I was trying to have a go at Facebook users or Facebook itself.  It is the latter as I attempted to convey my sense of information overload when look at the news feeds.  There are probably ways of clearing this up such as hiding game updates but they aren't that obvious to the casual user.  So if you didn't get it, thought it wasn't funny or were offended I'm sorry - this cartoon is already being washed away in the flood of social networking news and I'll come back to funny soon.

It's A No Brainer 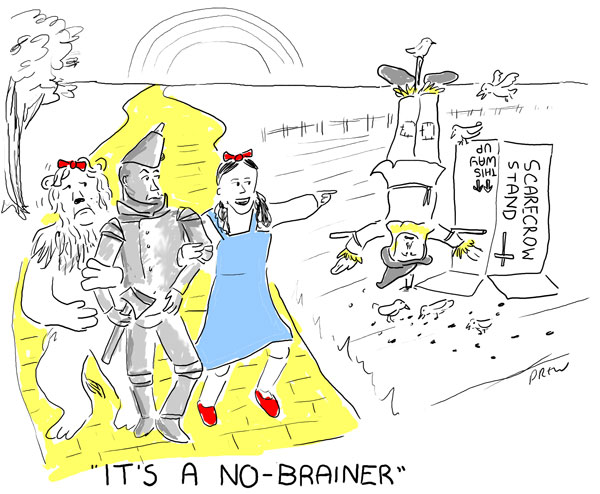