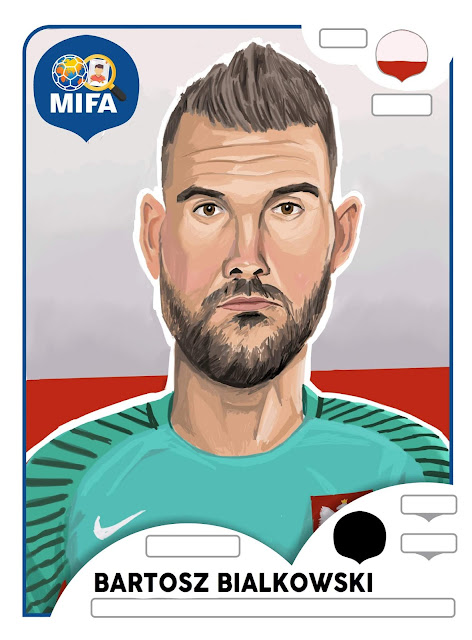 MIFA stands for Missing In Footie Album and is Dave Will's pre-World Cup project to have artists and illustrators across the globe make football sticker designs for all the players who are in the 2018 World Cup squads but didn't make the official Panini sticker album due to squads being announced and changed after the official album is finalised.

I only discovered this fun project when Peter Rasmussen or @badlydoodled who I follow on Twitter posted his entry and so I dived in to pick a player while there were still some left.  Some furious scribbling later and messing around between multiple apps and my entry is one of the 254 on show by over 150 artists and there is a great variety of styles and some stunning artwork.

I chose Bartosz Bialkowski from the Poland Squad who plays for Ipswich Town in the English Championship.  He made his international debut aged 30 back in March although he has strong competition from the usual No.1s of Fabianski (Swansea) and Szcesny (Juventus) for a starting place in the squad.
Posted by idrew at 01:15 0 comments