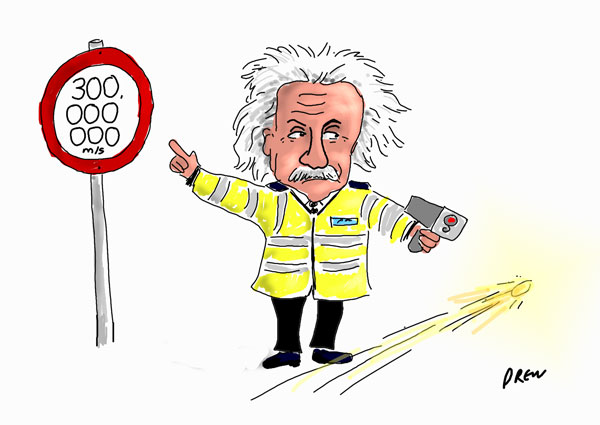 This week's compedition cartoon is my attempt to draw Einstein.  Before anyone nit-picks I know c 'the speed of light' is not exactly 3x10^8 but I didn't want to write 299,792,458 m/s with a relative measurement uncertainty of 4 parts per billion.
Posted by idrew at 08:35 0 comments 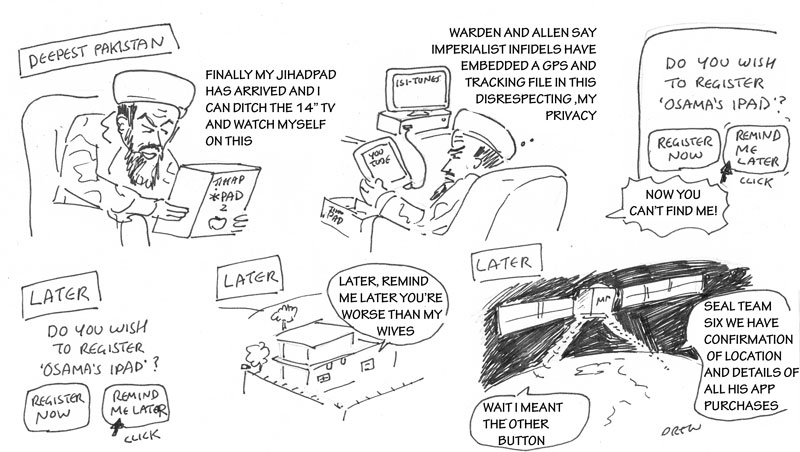 Back from my break and I've decided to be less topical than ever referencing events that broke in April (Warden and Allen discover the iPhone/Pad is storing all your location information longer than necessary) and at the start of this month the 'did it really happen' assassination of Osama Bin Laden by US special forces.

My theory about Bin Laden buying a (Jihad)Pad most be at least as credible as some of the theories floating around the Net.

Seriously however if want to know exactly where your iDevices are there's a service from Apple on MobileMe that helps you do that to frightening levels of accuracy.  I'm sure no-one else has that data.
Posted by idrew at 14:18 0 comments 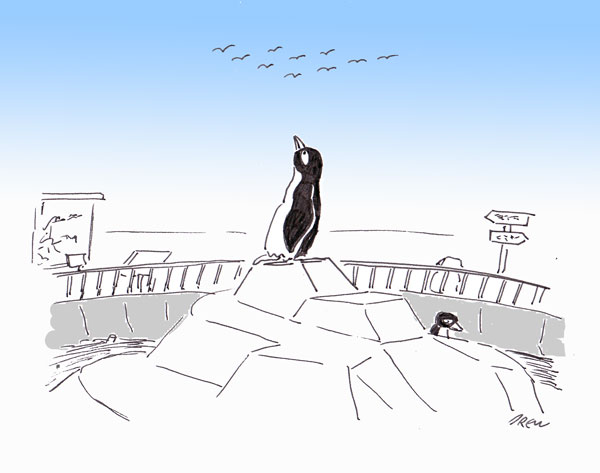 Another cartoon for the weekly caption compedition except this week there was no caption or words allowed only the theme 'flight'.  Since I was on holiday I had to sketch this one out based on my recent trip to the zoo where the hosts were always lecturing on conservation issues while locking up the animals.
Posted by idrew at 08:57 0 comments 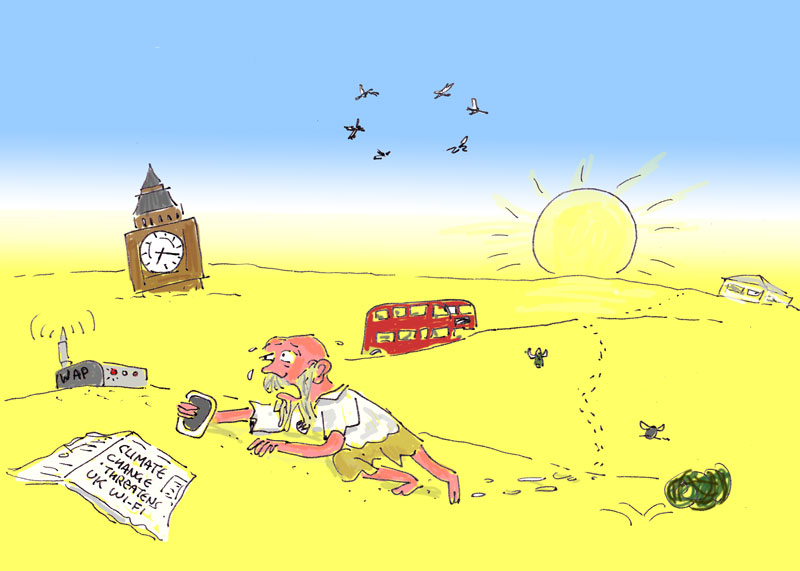 also picked up by the Telegraph and others.
Really the main threat to human civilisation due to more unpredictable weather, storms, extremes of blazing hot summers and freezing winters is not to the global food chain or the survival of people living in flood plains etc?  No in order to get our attention the government has to point out it will affect our wi-fi signals!!!  Oh and it does affect power supplies too.

This is even without  any discussion of the politics of climate change and the impact of human activity.  If politics, Science and the media want a proper debate on the subject they have to do better than this.  After all the threat to the frail human infrastructure on this planet has to come down to more than interrupting our ability to download books from the Kindle store.
Posted by idrew at 14:17 0 comments 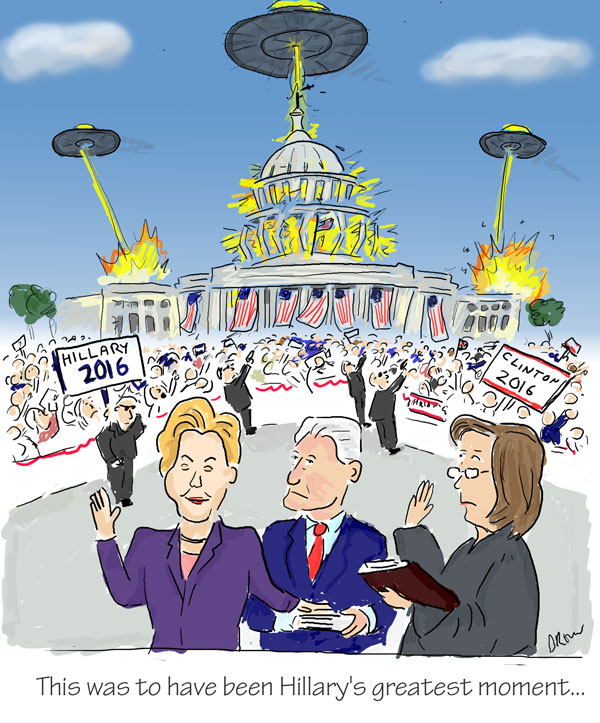 For those who wonder about the inspiration for my weekend cartoons I don't make up the caption it is usually set by someone else at CCGB and I have to make a cartoon fit it.  Hence the Hillary Clinton cartoon.  For the US audience I have no real opinion about Democrats and Republicans except to say I enjoyed Aaron Sorkin's West Wing alot. 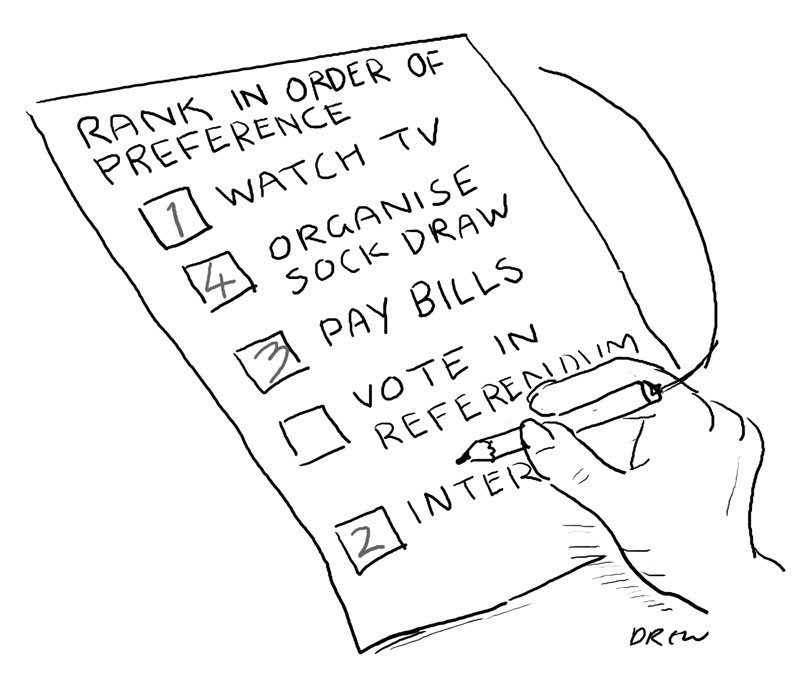 As you wake up today it doesn't matter if you are for or against AV, SNP, Labour, Conservative or Undecided as long as you vote.  I worry about turnout today - voter apathy is a much bigger problem than the system of voting.  Even if parties get over 50% of the vote if a sizeable minority don't vote then they don't represent the majority of the people.  Yes there is an argument that people fought and died for our democratic rights but even more than that it's your schools, roads, bin collections and general infrastructure that this affects. Get out the vote!
Posted by idrew at 22:58 0 comments 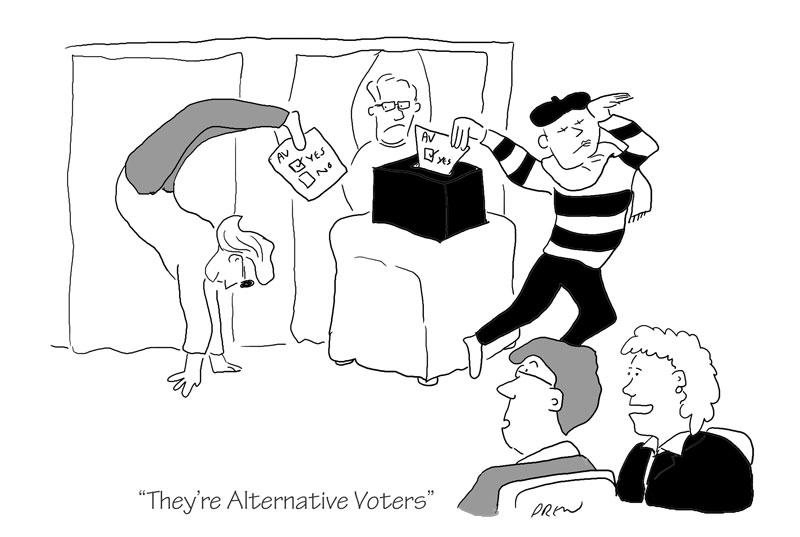 After yesterday's FPTP cartoon here's my take on the alternative vote.  Apparently it's not a fringe event but rather a form of proportional representation
Posted by idrew at 14:12 0 comments 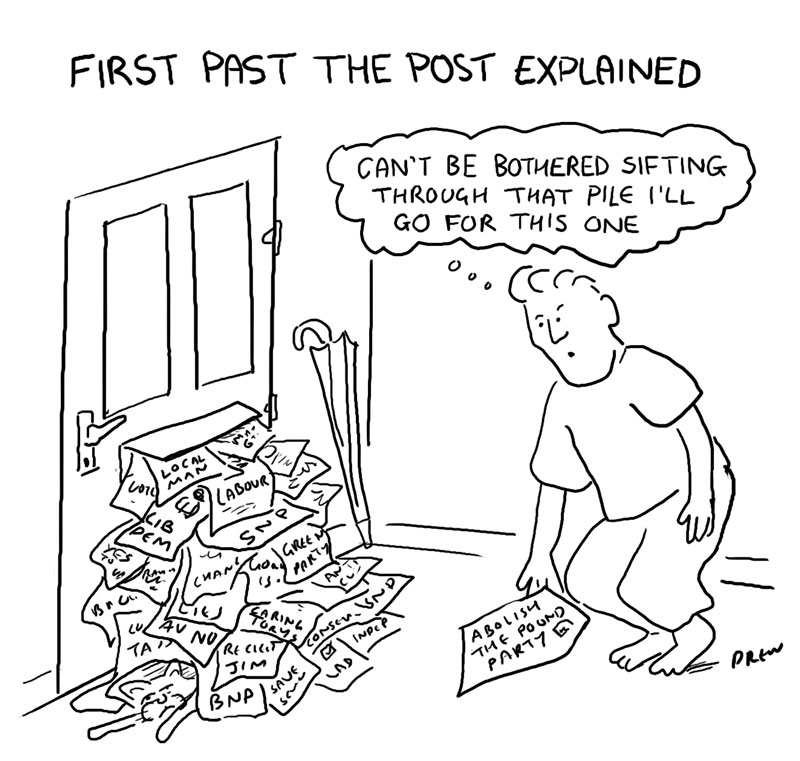 With all this talk about what the Alternative Vote system means the various campaigns have been accused of treating the electorate like pre-schoolers in setting out their arguments.  By spending all their time setting out what AV means they have neglected to explain First Past The Post in simple terms ... So I'm doing it for them (see above cartoon).
Posted by idrew at 13:50 1 comments