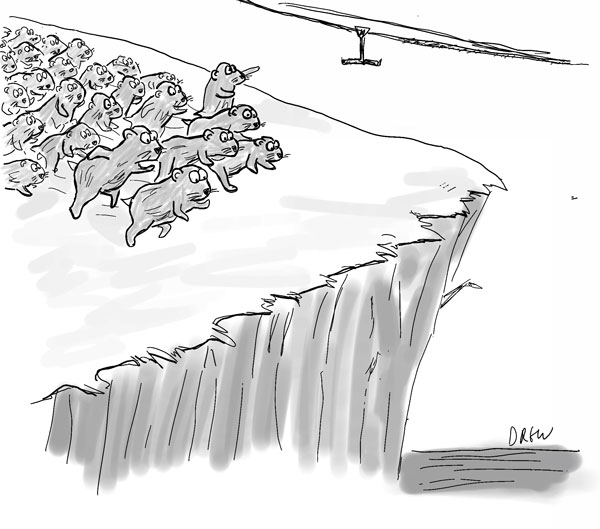 The one thing everyone knows lemmings for is a common misconception they do not commit suicide by jumping off cliffs.  The story about how people came to believe that is worth repeating here.

Lemmings are small rodents who inhabit the polar regions whose population varies immensely with population booms followed by sudden population collapses.  These population fluctuations are mainly down to a high reproductive rate, food availability and prey but it has lead human observers to make up stories such as a belief that they fell from the sky during stormy weather and died off in the spring when the grass grew.

The myth about Lemming suicides came out of Disney in the 1950s.  First Disney illustrator Carl Banks drew an Uncle Scrooge comic entitled 'The Lemming with the Locket' which showed masses of lemmings jumping off a Norwegian cliff.  Banks was probably inspired by an article in a magazine the American Mercury but then Disney went on to further perpetuate the myth with the film Wild Wilderness.

The story of lemming suicides in Wild Wilderness makes the furore over the BBC's polar bears born in a zoo controversy look like rather tame.  The footage of lemmings jumping to their certain death was both staged and faked.  The filmcrew went to landlocked Alberta Canada  which is not the lemmings natural habitat so first they had to procure their own lemmings from Inuit children and then staged a migration using a dozen or so lemmings on a turntable and clever camera angles to make it look like a mass of migrating lemmings stampeding towards their doom.  To film the sequence of the lemmings jumping from the cliff it has been suggested that they were pushed, propelled or herded over the edged just to get the footage required.  As the narrator says they are casting themselves into the sea they are in-fact plunging into a river.

The truth is that lemmings can swim and they will jump into water to cross rivers.  It is possible that some will drown if enough of them attempt it at once or the river is wide or particularly fast flowing but this isn't that different to what happens to other species.

So basically what I have drawn for this week's CCGB competition on the theme of 'Hope' is wrong.