2017 was a dramatic/terrifying year with inept government, threats of WW3 and robots stealing our jobs and so as we survive another year let us look with our humour glasses at  my favourite cartoons I drew in the last 12 months.  If you want you can compare it with the best 16 of 2016 and see if you think I've got better or worse. 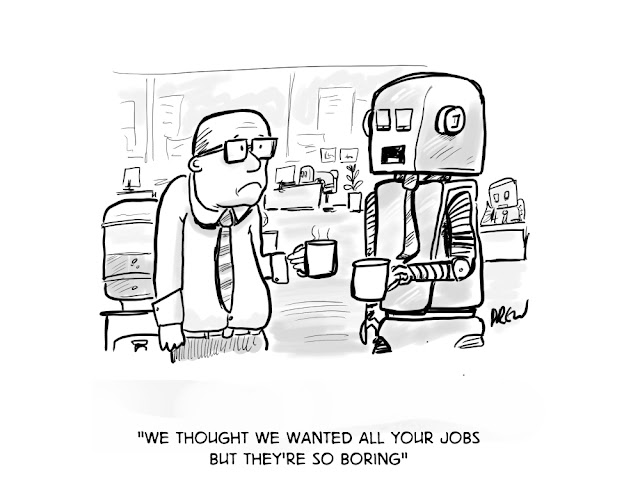 This is without doubt my best cartoon I have had published (so far).  It appeared in Private Eye back in February and started out as a more boring version with the human moaning to a robot about robots coming to take their jobs, but a late caption twist worked much better.  I liked the opportunity to draw robots in a boring office environment. 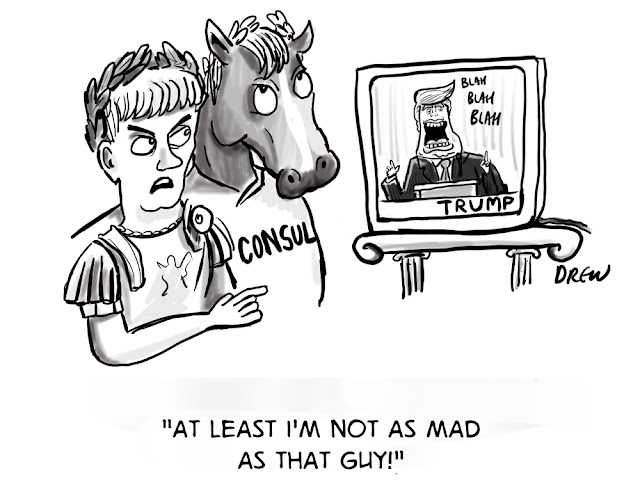 2017 spawned a multitude of Trump gags as the US President continued to defy all presidential conventions exiting the Paris agreement, facing up to North Korea, and using Twitter to attack the UK prime minister.  When drawing topical cartoons it was hard to come up with an angle that hadn't been covered better by a host of other cartoonists, but after reading Tom Holland's Dynasty: The Rise and Fall of the House of Caesar I drew this one.
The author Tom Holland himself did retweet it, which brought a few responses along the lines that Caligula wasn't really mad and didn't actually make his horse a consul which wikipedia does seem to agree.  However cartoons often work on popular misconceptions and myth as opposed to reality (for example the case of lemmings and cliffs).

3. Ed Sheeran Top of the Pops 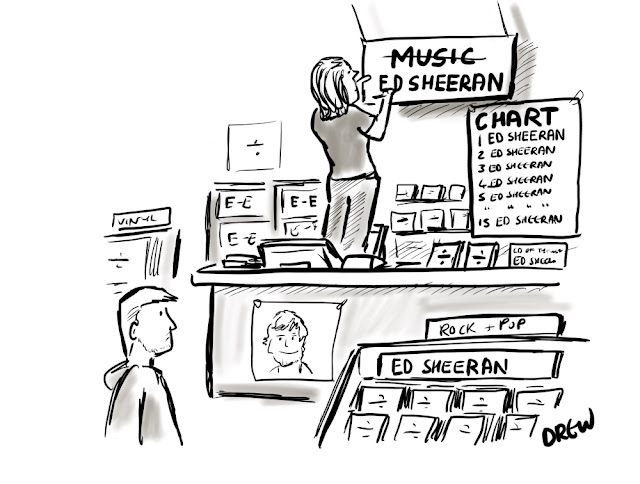 Thanks to streaming being included in the calculation of chart positions in March Ed Sheeran had 16 songs in the UK top 20 from his divide album. This cartoon from the reject pile was intended to show how he had become the face of music in 2017.  For the record I'm fairly ambivalent about the man's music myself. 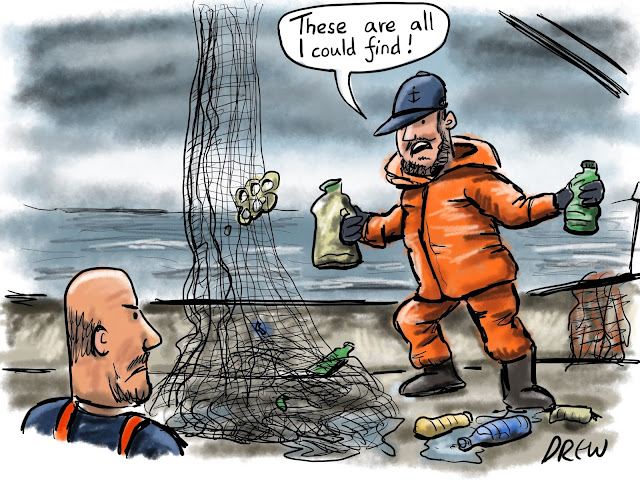 Drawn for the CCGB caption cartoon it tackled one of the year's more important issues the relentless dumping of plastics in the ocean causing massive pollution and endangering marine life.

One of my favourite non-topical cartoons from the year which plays on the element of surprise where the onlooker knows the truth but the hapless cartoon character is about to be in for a fright! 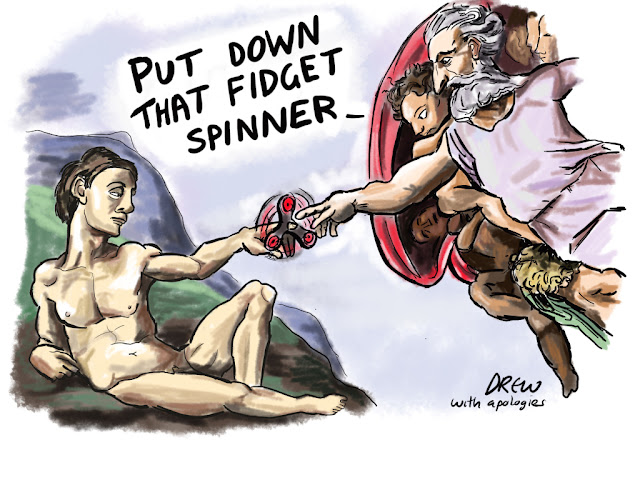 2017 was the year of the fidget spinner craze which did result in our household owning about half a dozen of the gadgets.  It spawned a fidget spinner magazine and a host of other fidget gadgets that did not take off.  However by the end of the summer it had been replaced by slime as the playground fad of choice.  Every so often I still come across one of our fidget spinners and give it a little twirl so it doesn't feel so abandoned. 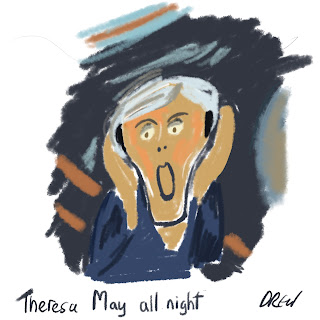 2017 was the year Theresa May ran probably the most inept out of touch election campaign of my lifetime which she didn't even have to call. Opinion polls showing huge Conservative leads over the seemingly unelectable Jeremy Corbyn lead Theresa May to gamble and call for an early general election to strengthen her hand in the Brexit negotiations.  Newspapers were full of early predictions of huge majorities, but May ran a robotic, ill-advised campaign and so when the exit polls came out it showed she was short of an overall majority.  I drew this cartoon as I was staying up awaiting the first election results. 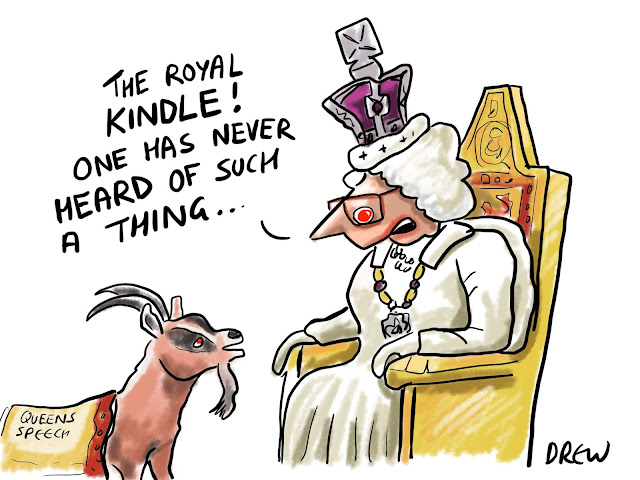 Such a disastrous election performance ought to have lead to a Tory leadership challenge, and many (myself included) concluded that the government wouldn't last the year.  However the government came up with a confidence and supply agreement with the Northern Irish DUP party.
During the negotiations the Queen's speech was delayed (allegedly because the goatskin parchment took days for the ink to dry)  and so for a Twitter Shape challenge I drew this cartoon. 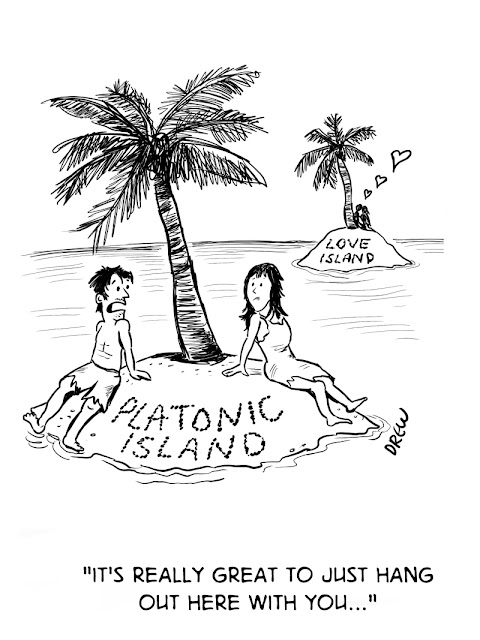 My other cartoon published in the Eye was this desert island gag.  I never actually watched Love Island even to research this, but had fun drawing the cartoon cliche stranded on a desert isle setup. 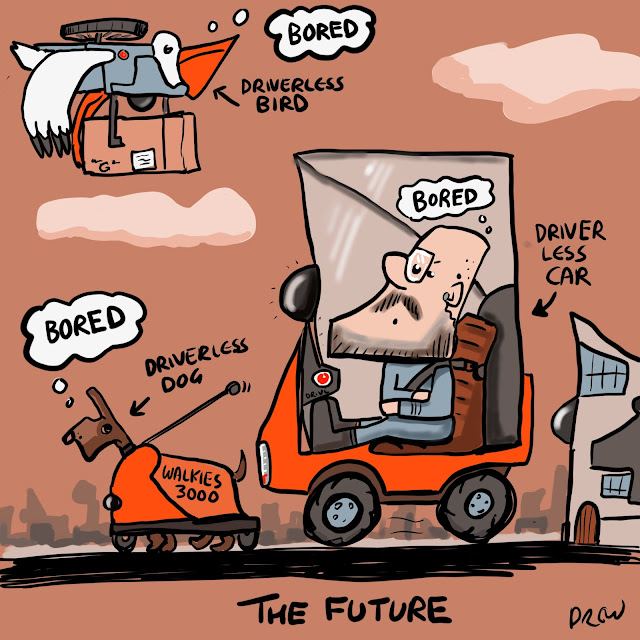 Driverless cars was one of the other topical tech stories of the year and for a ShapeChallenge I drew this driverless boring view of the technological near future. 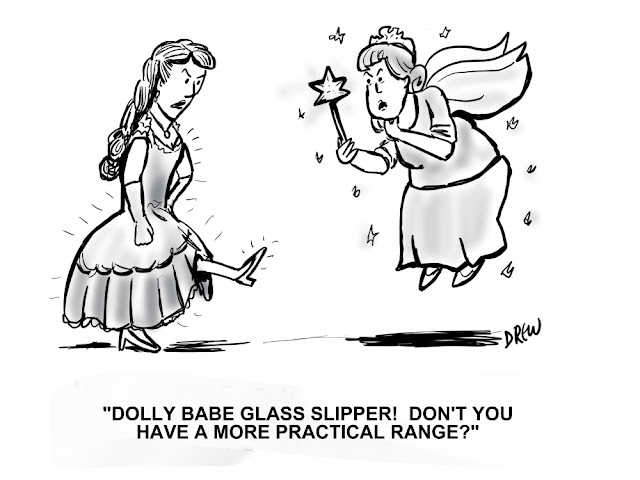 In 2017 social media was often able to put pressure on dubious practises and advertising of big companies and get them to change course.  One example was in August when first Miranda Williams and then plenty of others took Clarks to task for having a Dolly Babe range for girls shoes but a Leaders range for boys.  The range was removed from the website by Clarks. 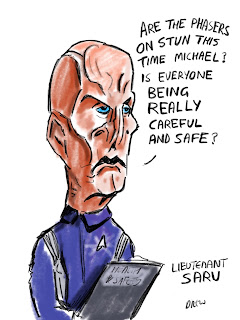 In October a new Star Trek series hit UK Netflix Star Trek Discovery and after a slow start, and endless Klingon monologues I found we got quite into it.  One of the best characters was the nervous science officer Lieutenant Saru. 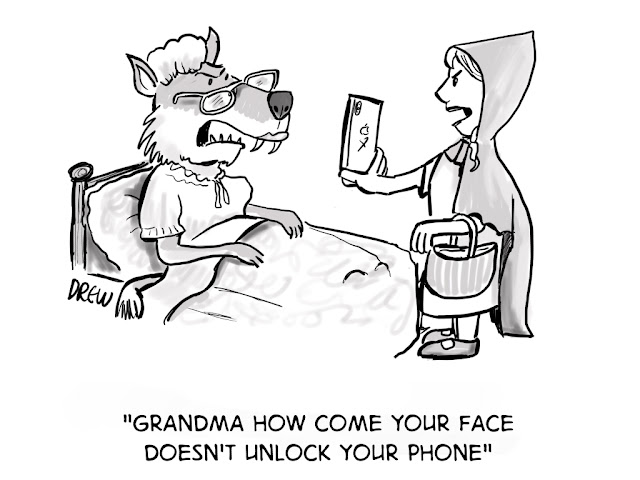 The biggest phone release in 2017 was the iPhone X which rendered the iPhone 8 released only minutes before immediately obsolete.  A big deal was made of it's facial recognition technology which had been problematic for other manufacturers who had their own technology fooled by photos (not a good look for security). 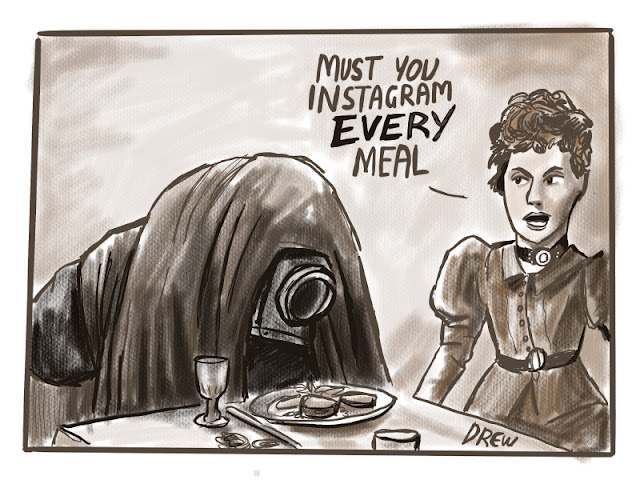 This year I started putting much more material on Instagram, and also started throwing occasional pictures of waffles and dogs on there as well.  This cartoon drawn won a CCGB public forum competition. 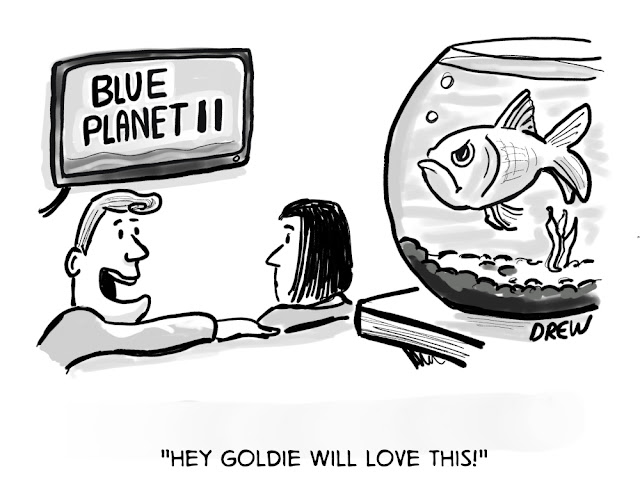 In 2016 Planet Earth 2 was the best program on TV and this year Blue Planet 2 the watery version was the year's most watched British TV show.  Also an excuse to draw another goldfish in a bowl (see goldfish estate agents and goldfish swimming lessons). 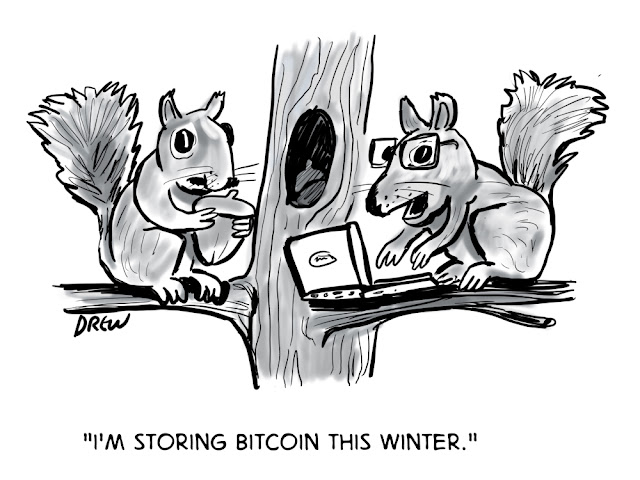 In 2017 crypto currencies like Bitcoin and it's many offspring and cousins surged in price, collapsed a little just before the Christmas holiday and Bitcoin is currently hovering at over 10x it's start of year price.  Working in IT there was plenty of debate in whether to get into Bitcoin and whether it was a bubble, Ponzi scheme or the future of money. 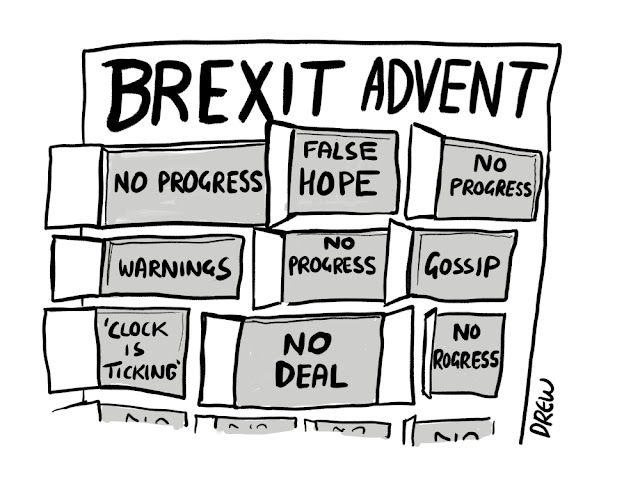 Thanks to deep cabinet splits Brexit phase 1 negotiations floundered for most of the year and so I prepared this pithy topical cartoon for the start of December which the touted final final deadline for getting agreement to move onto the next phase of talks about talks about trade talks.  Unfortunately (for me) just before the advent period there was an agreement (mainly to prop up the May government) and the cartoon didn't quite work as well.  I did see other cartoonists tackle the same Brexit advent topic in other more inventive ways. 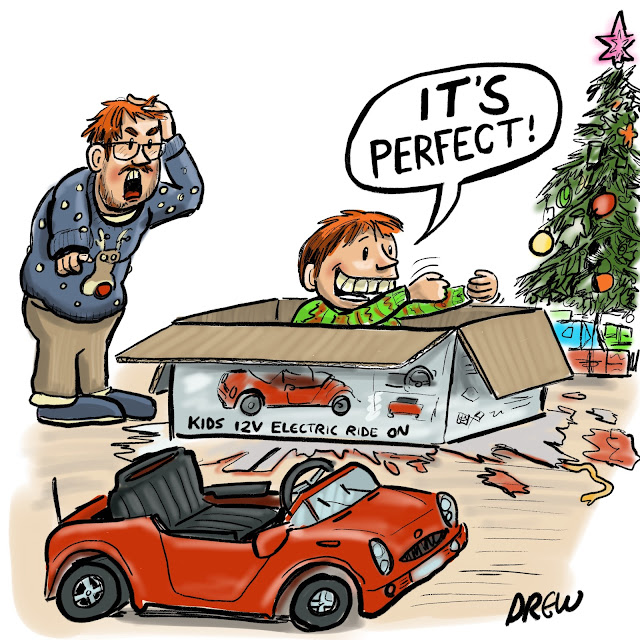 This is probably the best advent cartoon I drew just before Christmas because it resonated the most with other parents.
Posted by idrew at 09:26