Another epic year passes with more news of inept governments and impending disasters so what better way to look back than at 18 cartoons I did this year some of which got published and some of which belonged firmly in the reject pile.  Either way I always enjoy looking back and telling the story of 12 months in topical cartoons and so here is one of those lists but without making you scroll through clickbait-y adverts.

I drew this cartoon at the start of the year but all year long there was a steady drip drip of stories about how much Facebook knows about it's users and who they were sharing it with and what that data could be used for.  I'm sure it's all better now. 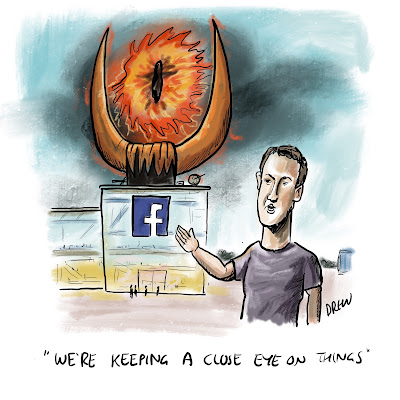 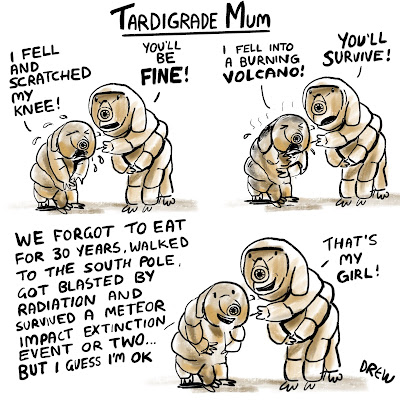 Art challenges on social media are often good for sparking off ideas and taking you down tangents you wouldn't have thought of otherwise.  In this case it was drawing something about tardigrades the super resilient micro-animals around mothers day.
This went about as viral as any of my comics went this year. 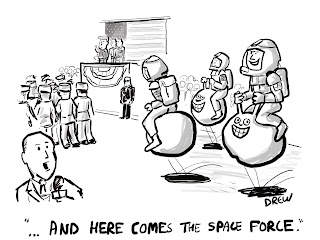 If I were an American cartoonist I imagine I'd spent most of 2018 drawing Trump cartoons given the amount of news his behaviour and tweets generate.  I did attempt a few this year one of which about his cancelling of the Iran treaty did make it into print but I enjoyed drawing this one the most.
The Space Force is the Trump administration's idea of allowing the US military to weaponize space with a new branch to sit alongside the Navy, Air Force and Army. 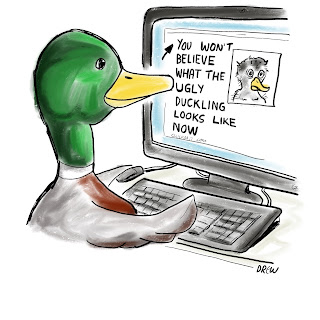 This animal on a computer cartoon ended up in the Eye and was reprinted in the Week.  Looking at all my cartoons I've noticed I draw many many drawings of animals and people sitting in-front of screens. 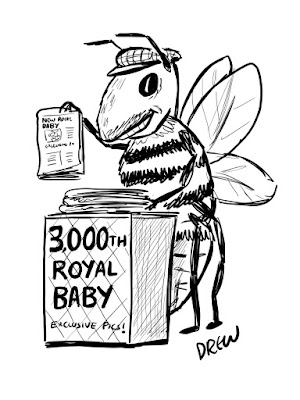 If I had to pick my favourite cartoon I drew this year it would probably bee this one about the third royal baby from Kate and William.  The news outlets do like a good story about the royals to break up all the domestic political goings on.
This cartoon and the next three were all in a run of three consecutive issues of Private Eye that I had cartoons in. 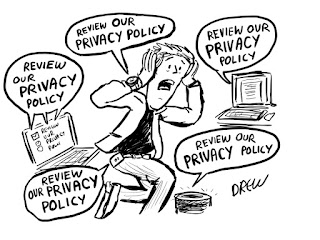 GDPR stands for General Data Protection Regulation an EU regulation on data protection and privacy which no-one who had ever worked in IT or signed up for any online service could avoid around the May 25th deadline.
Everyone from charities, small clubs to every online shop and website had to get in touch with anyone they had details on to talk about how they were going to responsibly police their data resulting in a deluge of emails.
This is one of those relatable topical cartoons which was perfect for the time but won't mean too much in the future. 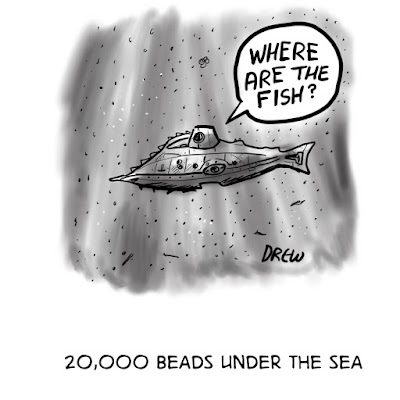 Plastic pollution was a huge topic in 2018 and an environmental issue few could argue against with lots of evidence that it was harmful to marine life.  By the end of the year my own children were quizzing us on our own use of single use plastics having been taught about it in school.
There were lots of cartoons on the subject floating around and I was glad one of my own to the pile. 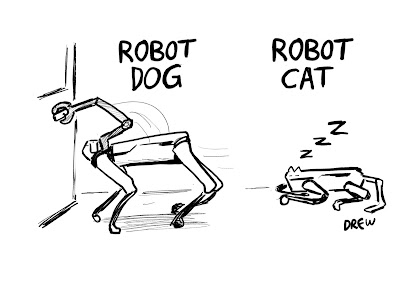 One of the creepiest videos of 2018 was of the robot dog being developed by Boston Dynamics that could open doors.
Sometimes you spend ages trying to come up with a gag and sometimes they just come to you quite easily like in this case. 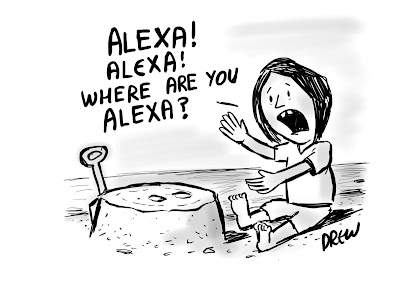 Every year there is one or two topics or ideas that come into my head over and over again when I'm thinking what to draw.  Quite often like in the case of fidget spinners and slime I never come up with a great gag and they all end up in the reject pile but it's fun trying.  Alexa was one of those topics of 2018 when I had a summer holiday, Christmas and other variants on the same theme.  However one of my older Alexa jokes was quite popular one of the days Alexa went down. 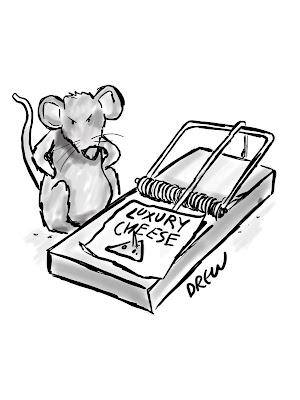 You would think the omnishambles that is Brexit would be a constant source of cartooning comedy but it isn't a subject I find it easy to come up with good gags for.  For one there are already lots of cartoons out there on the subject and so another off a cliff cliche isn't going to wow anyone if you don't have a good angle.  About the best I did in 2018 was there was a story about luxury cheese being hard to find after a No Deal Brexit resulting in this cartoon. 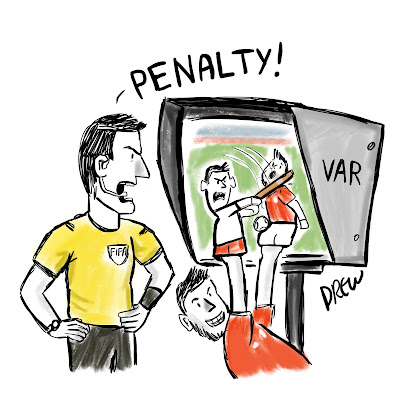 With the World Cup in Russia we were expecting the main England football story to be hooliganism not that a new manager in a waistcoat would turn a decent young team into semi finalists.  Watching England not being rubbish was perhaps the closest my 2018 to a real good news story.
The other World Cup story was VARS the video referee that they chose to trial on the biggest stage rather than perfect it in some other leagues. 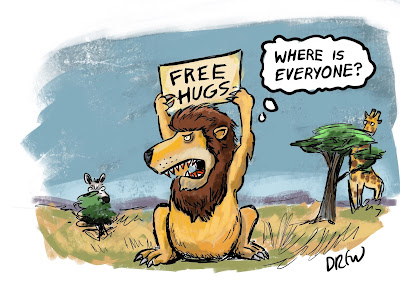 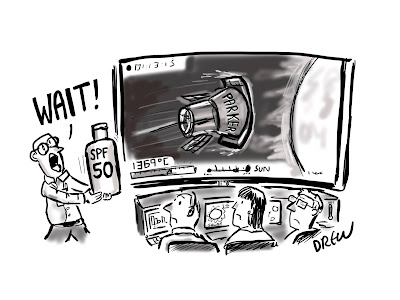 The NASA Parker probe launched in August is on a mission to the outer corona of the Sun.  Here is my attempt at a gag about it. 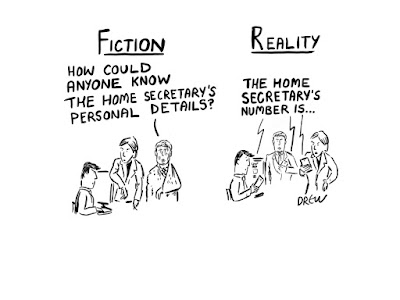 This topical cartoon combines two of my favourite themes the ineptness of the ruling Conservative party and technological mishaps.  It is based on the BBC's Bodyguard series which was perhaps my favourite TV drama of the year (although they wrapped it up a bit too conveniently).
As a visual gag there was perhaps too much going on but Private Eye did use it for the basis of a (better) written joke so the idea got published even if the visuals never were seen until now. 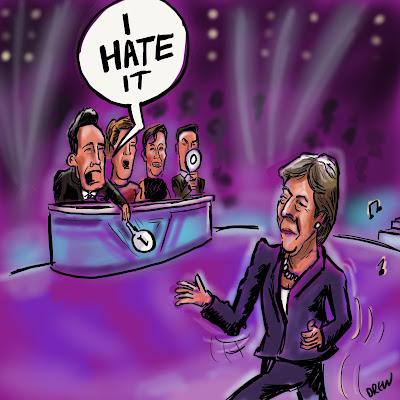 The  Conservative Conference gave us another great 2018 moment in Theresa May's speech which didn't involve cough sweets and props falling down like last year but strange dance moves as she came on.
It gave me a chance to practise my caricaturing skills both for her and the Strictly judges. 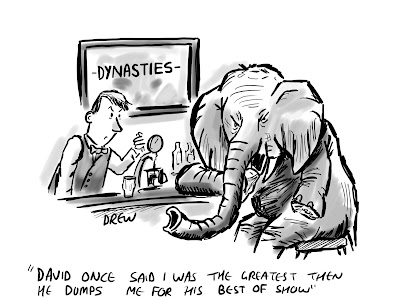 Some of the the best BBC content is the David Attenborough nature documentaries which this years was the Dynasties series.  I drew this cartoon before I'd watched it and maybe it isn't the funniest but I did like the drawing of the elephant. 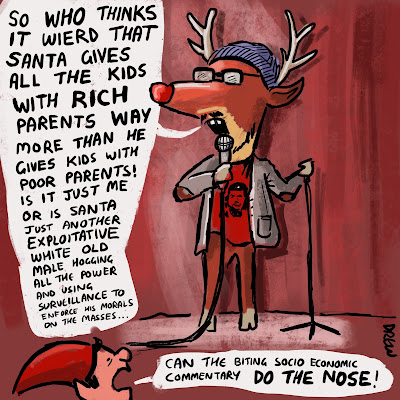 This one is from @studioteabreak's Monday #MythicalMashup challenge which gives you two prompts one of them mythical and can lead to all sorts of unexpected places.  In this cartoon I got Rudolph to deliver some devastating social commentary on the injustice of Santa which I have tried before in other forms but this one has a certain charm about it. 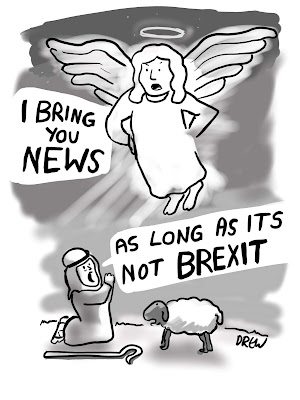 And to remind it off a reminder that you just can't escape from some stories and we have months of Brexit stories to keep us going in 2019 and probably for the rest of your natural lives.