Moo They Know It's Christmas (Advent 4) 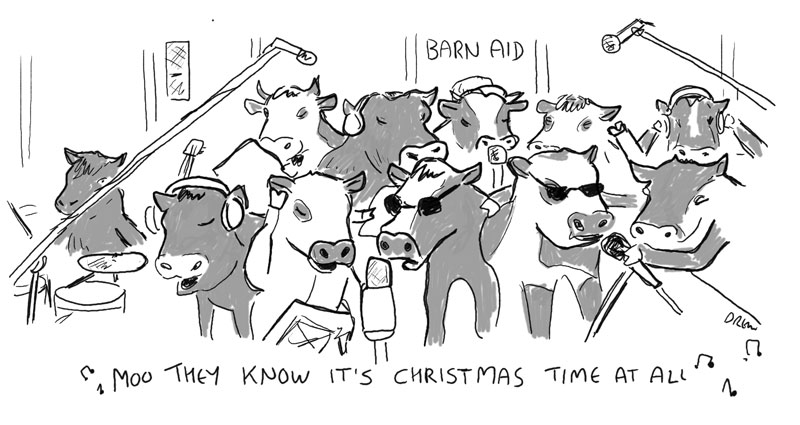 I learned from a friend at work that farmer's don't get Christmas off (something to do with animals still needing looked after).  Which brought us to the pun 'Moo They Know It's Christmas'.

So being me I attempted to rewrite the lyrics of the famous 1984 charity record.  I remember my sister and I had a special EP record version of the band hit and the general satisfaction from the general population that we'd done something good through contributing to it and the Live Aid concert the following year.  Ironically Bob Dylan was critical of the other Bob's (Geldolf) effort saying some of the money could have gone to helping American farmers pay their mortgages to the bank which led to Farm Aid.  In response Geldof called him crass while saying Farm Aid wasn't a bad idea.


There's a world outside your window
And it's a world of hedge and field
Where the only liquid flowing
Is for butter, cream and tea


And the Christmas bells that ring there
Are the cockerel's crows of dawn
Well today thank God it's them instead of you.


And there might be snow in Archers-land this Christmas time
The greatest gift they'll get this year is light.
Where turkey stuffing grows
The eggs of egg-nog chose
Do they know it's Christmas time at all


Feed the herd, let them know it's Christmas time...