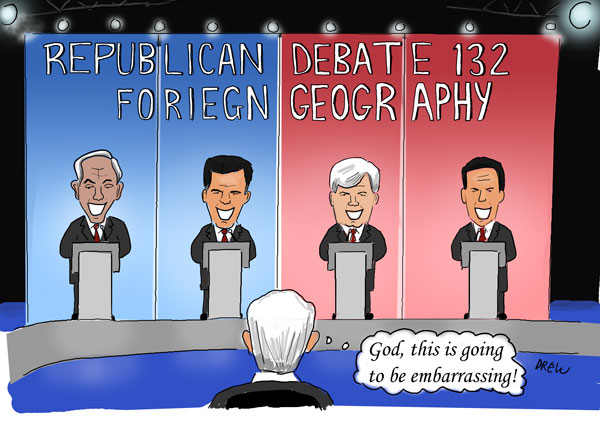 Number 1 - I know I have mis-spelt foreign or rather I did after my wife pointed it out and I kinda liked leaving it in.

Number 2 - I have no particular prejudice against any of the Republican candiates whoever they are.  The fact there are now only four meant less drawing for me but on this side of the pond the coverage of the Republican primaries takes the form of whose made what gaffe today.  The most popular type of gaffe for us is when a presidential candidate doesn't know some geography like where Armenia is or the capital of Uruguay.  It doesn't matter that most people couldn't answer all the questions a potential president is asked it just makes us feel superior.

Number 3.  I don't know if I'd vote Republican or Democrat except I'd vote for Josiah Bartlett from the West Wing as long as Aaron Sorkin was still doing his speech writing.
Posted by idrew at 14:54