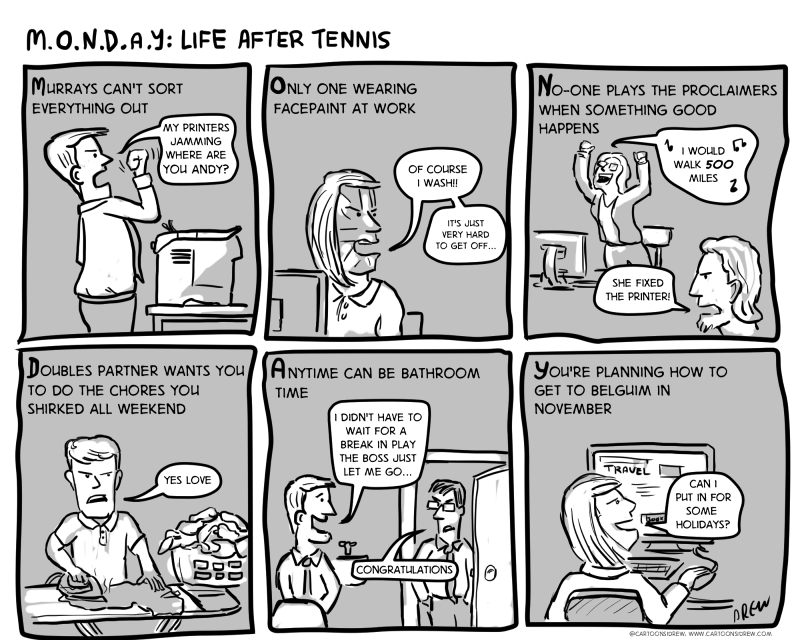 After a weekend of TeamGB Davis Cup action against Australia its back to normal on Monday with a thump!  On Saturday we were incredibly lucky to have tickets to see the doubles match of Andy and Jamie Murray vs Lleyton Hewitt and Sam Groth.  It was a five set roller-coaster ride of raw nerves which was so much more intense for being in the Emirate stadium and seeing the sheer relief and joy of the GB players and crowd at the final result.  It must rank as one of the best tennis matches I've ever watched and certainly the best doubles match I've witnessed.

Afterwards I did feel a little sorry for Lleyton Hewitt and Sam Groth who gave it their all in what was a pretty even fight.  It is likely to be Lleyton's last Davis Cup tie before he retires after the Australian Open in 2016 but given the way he played you never know.  It's a bit sketchy but here's a wee doodle  I did of them after the match 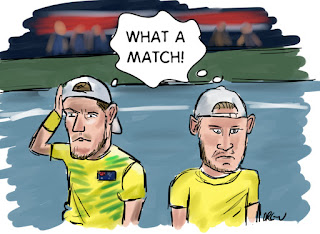 On the Sunday Andy Murray despite playing the previous two days wrapped up the tie with a reverse singles victory over Tomic and everyone could start thinking about Belgium in November.  Yet before then we have to come down from our sporting high and work through the intricacies of normal working life.

I experienced it before in Glasgow after the Commonwealth games when the closing ceremony finished and the Commonwealth banners, cars and statues disappeared (some stolen) it felt like the day after the Christmas holidays when you know its January and its a long long time til Santa visits again.  Here is the cartoon I did last July called Commonwealth Legacies.

ps. This was more first live Tennis event (I've been to plenty other sports) and an hour or so in I felt very middle class tut-tutting at the inconsiderate types shuffling around when it wasn't the appropriate time to do so (and in Andy Murray's eye line as well!).
Posted by idrew at 14:49