Whale or not Whale? 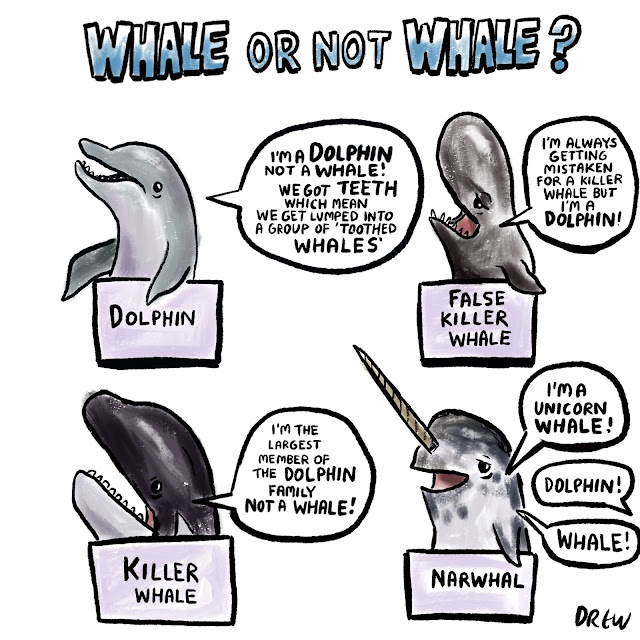 Over the last few years I've taken part in more and more Twitter art challenges starting with the Virtual Studio setup by Sarah McIntyre which currently does #MythicalMashup (Mon), #ShapeChallenge (Tue/Wed), #PortraitChallenge (Thurs).  If you want to have a challenge a day you can do #colour_collective on Friday which tends to have more finished pieces and #SaturdayScribbles on Saturday.

The theme for #SaturdayScribbles was whales and I decided to draw various whales (See above), but as I searched for whales to draw I became drawn into the what is a whale and when is a whale actually a dolphin even if it still a whale.

The wikipedia entry has Whales down as an informal group within the Cetacea order usually excluding dolphin and porpoises.   If you google 'are dolphins whales' you will find the internet does not have a coherent position (quelle suprise!), and it doesn't take long to find examples of marine mammals that are called whales but are infact dolphins e.g. the killer whale or orca.  This is of course down to the way humans have named animals like when ancient Spanish mariners called orcas whale assassins which was translated into killer whale.  There are 5 other dolphins that are named whales including the False Killer Whale who must be really annoyed at not only at being mistaken for a killer whale, and being thought to be extinct, but not ever getting their own name.

Yet in the end until dolphins/whales understand English they are never going to get annoyed at what we do or don't call them.
Posted by idrew at 13:00