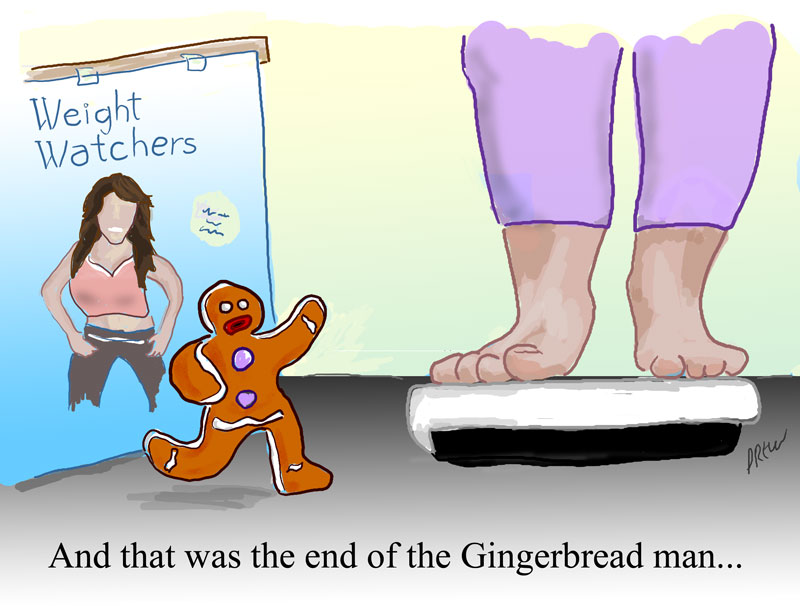 The Gingerbread man is another favourite tale of my children but the tale of home baking, cows and foxes seems like other children's tales slightly outdated now (see traditional version).

If I were to update it for today's audience it would go something like this:


Once upon a time there was a little old man and a little old lady who lived in a tower block.
One day they were very hungry for biscuits but they couldn't afford the gas to use their cooker
so they hobbled onto a bus and wobbled down to the supermarket.
There in the artificial in-store bakery were rows and rows of identical Gingerbread men
with fondant for eyes and Smarties for buttons.
As soon as they lifted a gingerbread man off the shelf he burst out the
over-engineered packaging and ran down the Bread aisle shouting 'Don't Eat Me'.
The little old woman and the little old man staggered after him.
'Stop! Stop!' they croaked.
The gingerbread man taunted them saying
'Run, run as fast as you can!
You can't catch me I'm the gingerbread man'


Down the aisle he sped when he came to a toddler.
'Stop! Stop! I wanna eat you," yelled the toddler.
The toddler was strapped into his pram and the
gingerbread man sprinted past singing
"Run, run as fast as you can. You can't catch me
I'm the gingerbread man!"


Past the checkout he met a security guard.
"Stop! Stop! wee man," called the hungry guard,
"I want to eat you."  Again the gingerbread man
was too agile and he slipped through the doors
yelling "Run, run as fast as you can.  You can't catch
me I'm the gingerbread man."


The dog broke free and joined in the chase.  The gingerbread man laughed and laughed until he came to a busy dual carriageway.  'Oh crumbs. They'll catch me now or I'll be
road kill.'


A sly women came from behind a lamp-post.
'I can hide you in this building,' she said.
'Follow the signs and you'll be safe.'
'You won't want to eat me will you?'
asked the gingerbread man.
'Of course not,' smiled the women.
'We're here to help you.'


The gingerbread man followed the signs, through the
gate, down the path until he reached the door.
Tired and weary he went inside the
Weight Watchers meeting...


AND THAT WAS THE END OF THE GINGERBREAD MAN.
Posted by idrew at 13:42