It only seems like yesterday that I did 18 cartoons from 2018 but here are again another year of Brexit and UK politics sinking lower than you thought it could go. However the awfulness did give cartoonists some good material to work with and so here are some of published and unpublished cartoons from the events of 2019.

1. Brexit, Brexit and more Brexit
This cartoon from the January reject pile illustrates the ongoing challenge of 2019 to keep drawing cartoons about the prevailing issue of the day without resorting to cliche and coming up with different angles on what seemed like a year of delay and drama. 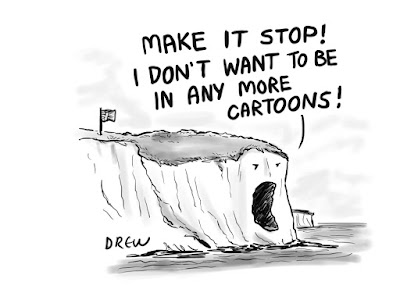 2. Global Warming Winter
Here’s a cartoon that Private Eye were going to run but then got pulled when Trump actually tweeted about global warming and snow (they did provide a kill fee). I did draw a fee climate cartoons in 2029 but this was the one that got closest to being published. 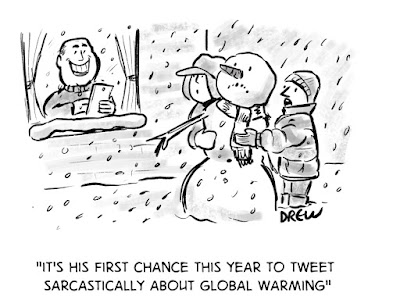 3. Valentines Day Stockpiling
It’s easy to forgot but there was several times in 2019 when I was picking up prescriptions wondering if I would get the next one if there was a No Deal Brexit or if we should be stockpiling food.  In reality it would probably be the fresh goods not the cans that would disappear first. Don’t worry we can still do it again at the end of 2020 if negotiations don’t go well. This one was in the Eye. 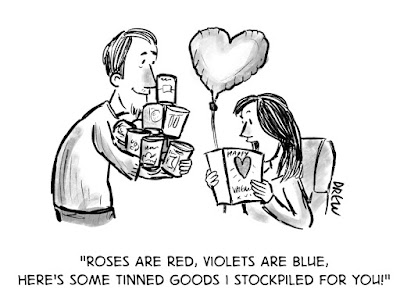 4. Hedgehog Brexit
This was perhaps my most successful published cartoon of 2019 just after the 31st March deadline got extended by Theresa May I was looking for a spring angle and dragged poor hedgehogs into the political mire. It was in with a batch of what I thought were funnier and clever cartoons but it goes to show how often the one that works captures a mood at a specific time.  As well as being in Private Eye it was also in the Political Cartoon Awards of 2019 down in London. 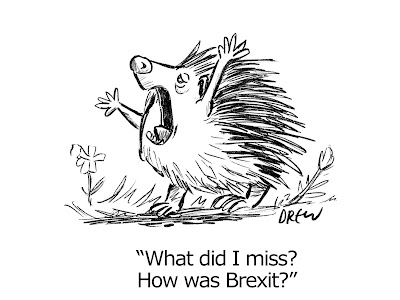 5. Writer AI
On the technology front there was a story around Feb of AI being able to write news articles and fiction a sort of deep fake for writing which inspired this cartoon which was probably my favourite drawing I got published. 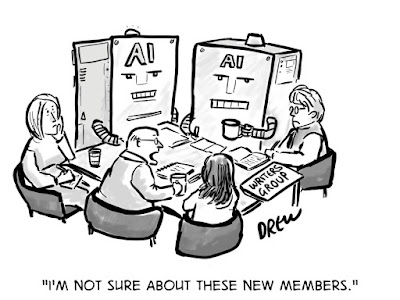 6. Black Hole picture
In April scientists produced the first picture of a black hole at the centre of galaxy M87. This gag was a quick one to produce in Procreate as the image was a blurry ring of fire. 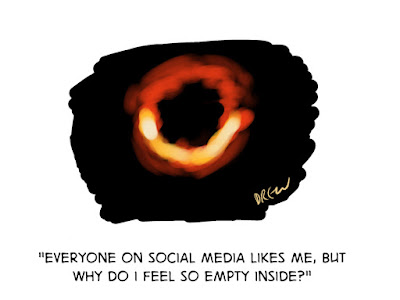 7. Changing name
During the Brexit debates a number of Labour and Tory MPs broke away to form an independent group that would run in the European election. As part of their campaign they changed name and logo several times. 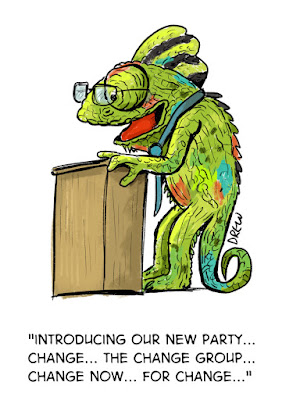 8. London skyscraper pool
Sometimes you just draw a gag based around a social media viral,post in this case a proposed new impossible pool on top of a London skyscraper with no obvious entry point. I liked the drawing but knew it would have limited reuse potential. 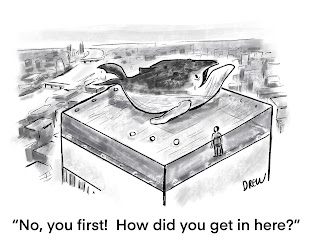 9. Facial Recognition
There was court cases about facial recognition’s use on the street this summer and so I drew this cartoon. 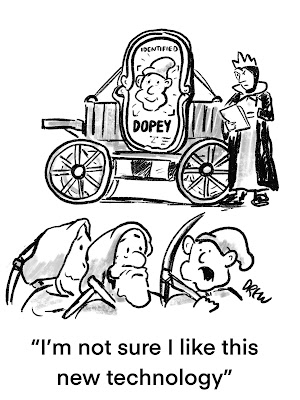 10. Tory Leadership Election
When Theresa May stood down as Conservative leader Boris Johnson faced a whole raft of lesser known figures for the crown.  To improve my caricaturing I drew them all and my favourite to draw and listen to was maybe spy Rory Stewart. Boris Johnson won comfortably. This is my only non-cartoon to make my list of 19 “cartoons”. 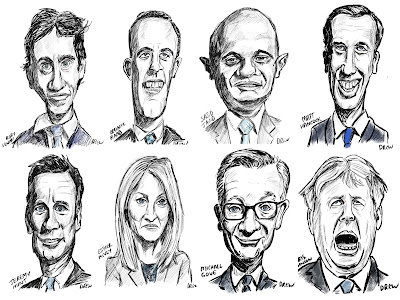 11. Sugar Tax (1500th Private Eye)
Matt Hancock the health secretary made public some ideas about a ‘Sugar Tax’ to tackle obesity but then in July he dropped them in the dying days of the Theresa May regime.  This was not the only time in 2019 Matt Hancock went back on his principles.  This one appeared with colour in the 1500th issue of Private Eye. 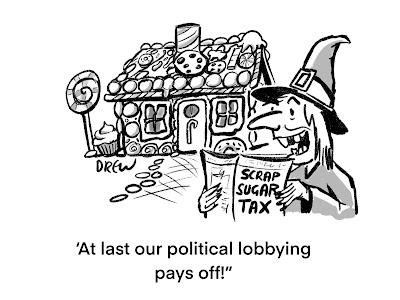 12. Impending election
It’s hard to believe I drew this in August in the midst of speculation that there would be an election (that eventually turned out to be in December). The advantage of making this sort of prediction is that even if your timing was off you knew it would eventually come true and you’d look like Nostradamus. 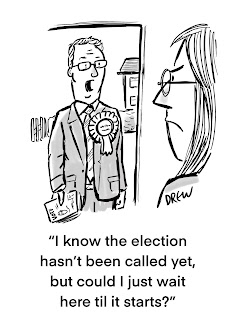 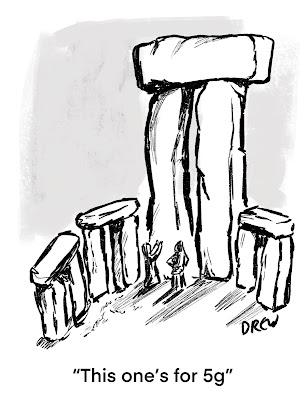 14. Deep Fakes
One of the technology stories of 2019 was about how convincing deep fakes were becoming. 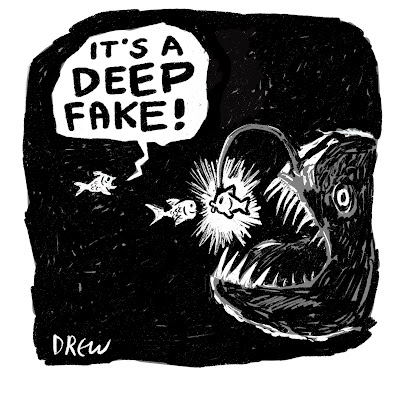 15. Turkish Invasion
When the Trump administration withdrew US troops from northern Syria allowing Turkey to invade claiming it was an anti-terrorist operation against Kurdish groups it was hard to draw a cartoon response when our Kurdish allies were being killed by our NATO allies.  This was all I could come up with. 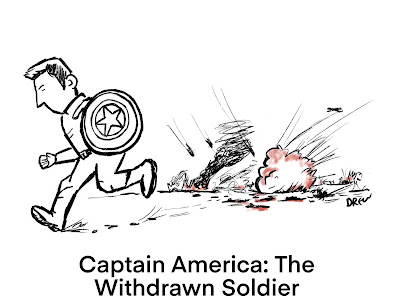 16. Billionaires
At the start of the election there was much talk about the top 5% and the taxes they pay including tech billionaires.  If you asked Alexa though you might have gotten another opinion. 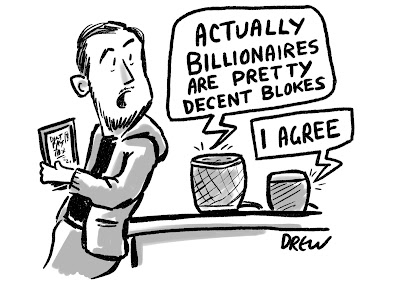 17. Trump Impeachment
In 2019 the US democrats took the first steps in launching impeachment hearings against Trump who was caught trying to get Ukrainians to give him dirt on his political rival in return for US aid. It will roll into 2020 when the Republican dominated upper house will probably squash it. I drew this around Thanksgiving. 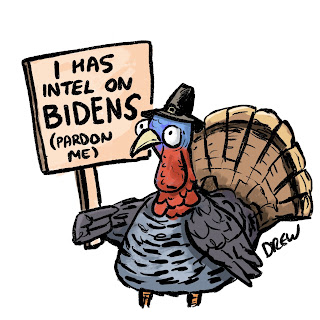 18. Election in Scotland
This was my most successful tweeted cartoon of 2019 drawn on election night after former Scottish Conservative leader Ruth Davidson said she’d swim nude in Loch Ness if the SNP managed to get 50 seats and the exit poll which was awful did at least make it look like a collapse in the Tory vote in Scotland might deliver such a result. The SNP got 48 seats and Boris got a large majority. 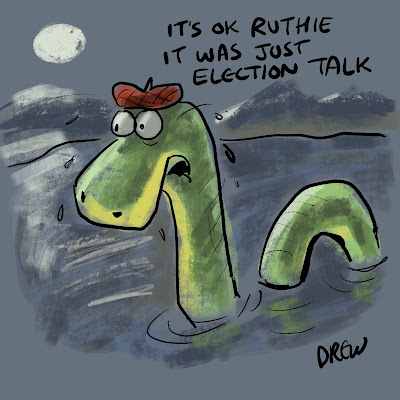 19. Baby Yoda
The big culture hit of 2019 was ‘Baby Yoda’ of the Star Wars TV series The Mandalorian which managed to outshine the last Star Wars movie and perhaps the traditional Christmas characters. 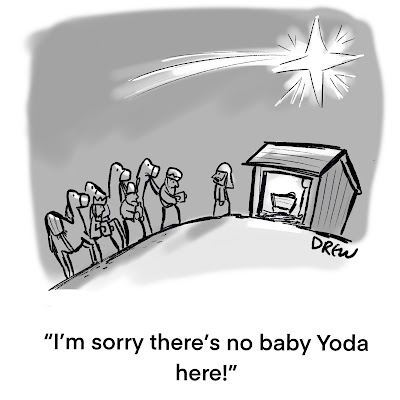 Thanks to everyone who liked, RTed or commented on my work in 2019. It was a year I joined the PCO, was in exhibitions in Edinburgh and London and sold work, as well as being published in the Private Eye and the New York Times Upfront magazine. Who knows what 2020 brings but I hope we all do better politically than we did in 2019.