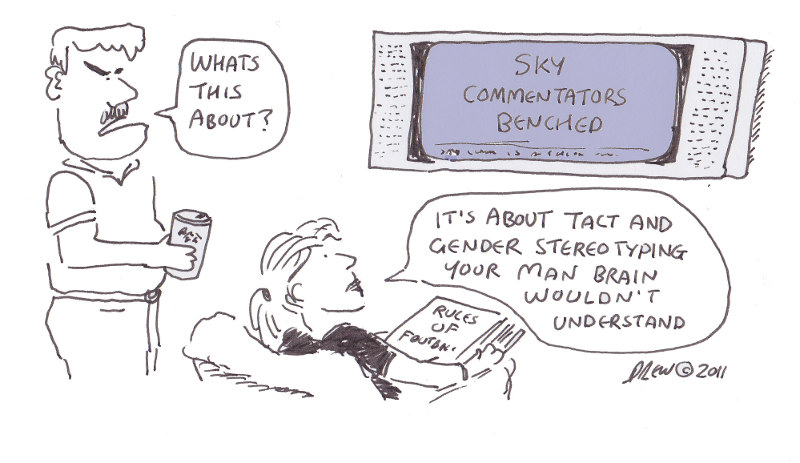 Today's topical cartoon refers to the story about Sky Commentators Andy Gray and Richards Keys comments about women assistant referees not knowing the offside rule.  Like Gordon Browns election gaffe the remarks were made when they believed the microphones weren't on.

Doing cartoons about topical events is all about having an idea fast while it is still imprinted in the public memory.  Too many times its like when someone says something to you and then several hours later you think of a really witty reply but it's too late.  To get something like this published (and I'm not sure it would be) I'd had to be maybe a day earlier as by the time tomorrow's papers/editions roll out the 24-hour news bandwagon will have moved onto some other gaffe made by some other celebrity.

It also reminds me of my only 'published' cartoon which was way back in my University days when I know a guy who helped compile the Hamilton Academical Fanzine who commissioned a cartoon called 'Why Women Don't Play Football'.  It would not look very enlightened today but I've made up for it by trying to be sensitive and understand the female response to these totally unacceptable comments.
Posted by idrew at 23:59