Tron Legacy: What Sam Flynn Should Have Said To His Father 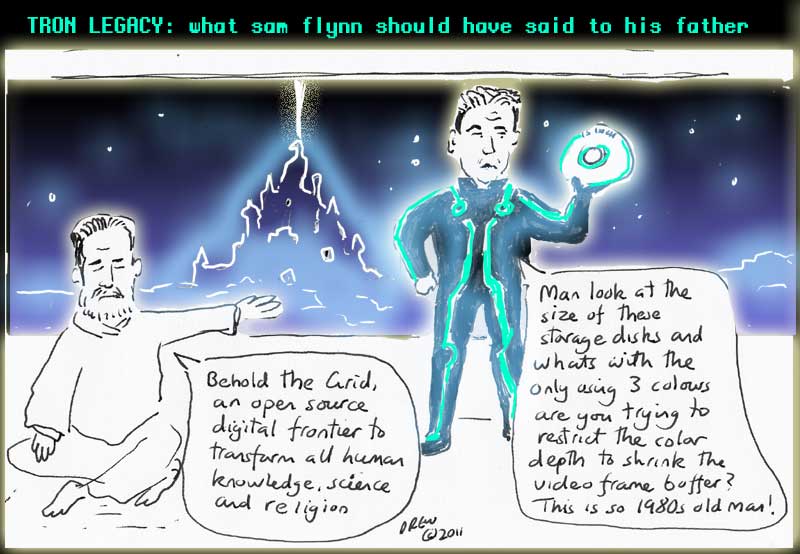 Watched Tron Legacy last night in 3D IMAX and here are my cartoon thoughts on the IT accuracy of it.  As a general film it was very entertaining as an accurate depicition of IT I have some plus and minus points.

There are a couple of very minor spoilers below so if you haven't seen the film just ignore everything from here on down.

+ The use of Linux (very Open Source) as a way of accessing the Grid was mostly accurate and you get points for using real computer OS.  He tried
- The color pallette of the Grid was about three colours (as mentioned in cartoon) - blue, red/yellow, white.  I remember programming the Mac back in the 1990s when I was excited about getting access to 256 colours so why in this new decade has the Grid not got millions of colour options.

- Storage Disks - what diameter was everyone's storage disk maybe 20 inches.  In the 1970s there were 8 inch disks, making way for floppy 5 1/4 inch disks in the 1980s and then standardising on 3.5 inch disks by the late 1980s.  By now we have gigabytes on USB drives so why the need for frisbee sized storage devices that are always falling off and killing people?

I have some other thoughts on Tron Legacy that may form another cartoon but if you haven't see it you should go to the cinema and watch it so you understand this post.
Posted by idrew at 02:25

Email ThisBlogThis!Share to TwitterShare to FacebookShare to Pinterest
Labels: film, IT, Open Source