Why we shouldn't resurrect Dinosaurs 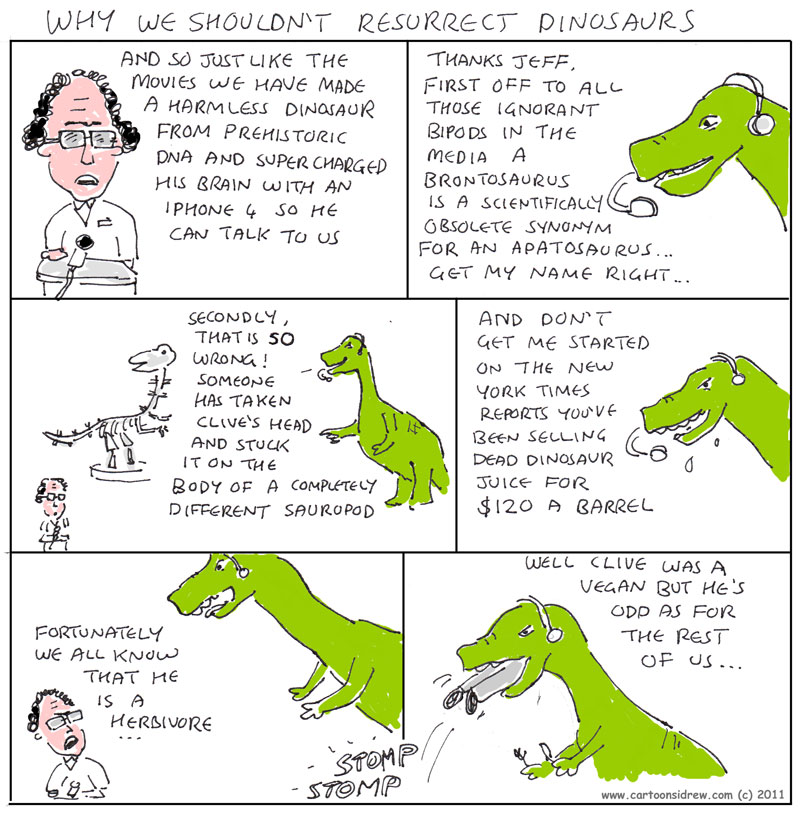 As well as the shocking news that dead dinosaur juice surged to almost $120 a dollar thanks to the unrest in Libya today I learned that Brotontosaurus don't really exist!!  This is after me spending last summer singing a catching little song to my kids about keeping a Brontosaurus as a pet who was as big as a house.

It turns out I should have been singing 'Apatosaurus don't you wait for me...' instead.  The story behind this interesting fact can be found here http://www.unmuseum.org/dinobront.htm

The short version is that in the late 19th century a couple of prominent paleontologists, Cope and Marsh were trying to outdo each other to see who could find the most exciting extinct animals.  In 1877 Marsh found a fifty foot creature which he called a Apatosaurus.  Then later that year he found a eighty foot creature which was the more famous Brontosaurus beloved of childrens songs.
Trouble was Marsh was more interested in beating Cope and inventing more dinosaurs or he would have noticed (as Riggs did in 1907) that the Apatosaurus specimen was merely a younger version of the Brontosaurus.  So the species were the same and so scientists decided that the first published name Apatosaurus should be the correct scientific term which didn't stop people who preferred the snappier Brontosaurus.
To make matters worse it turns out the head Marsh claimed belonged to the Brontosaurus actually came from a different dinosaur leading us to wonder whether Marsh got mixed up or deliberately used a skull from another location.

I won't paraphrased the whole article but there are other things we thought we know about Brontosaurus that were wrong too which leads onto tonights cartoon warning.  Lets not dabble in recreating dinosaurs from DNA stuck in amber like Jurassic Park.  After all they might be angry with us from powering our cars with dead dinosaur juice and calling them the wrong names!
Posted by idrew at 13:58