Look Rules Are Meant To Be Broken Aren't They 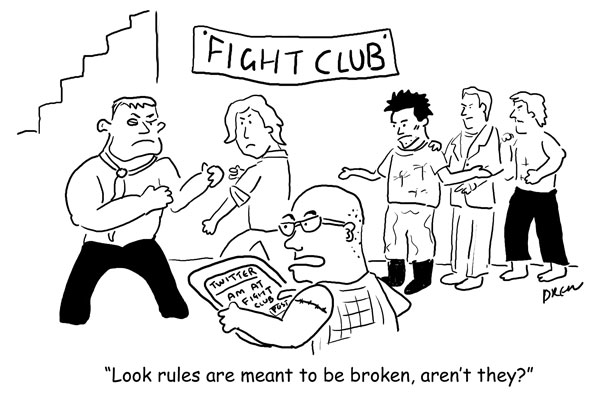 For anyone wondering about the cryptic nature of the Title it's from a Cartoonist Forum caption compedition that I am entering for professional and wannabe cartoonists.  You have to draw a cartoon with the aforementioned caption,

It is based on the notion that Fight Club's famous First Rule "The First Rule Of Fight Club Is We Don't Talk About Fight Club" wouldn't last five minutes in the age of Facebook, Twitter and everyone's personal lives being public.  Of course explaining a cartoon sort of defeats the purpose along the lines of a Picture being a thousand words.

UPDATE:
The voting finished at 6pm and the result was out of 13 cartoons I was joint first with Roger Kettle but he won on some sort of Alternative Vote system where number of 2nd places count.  Still I am chuffed given the quality of the field.