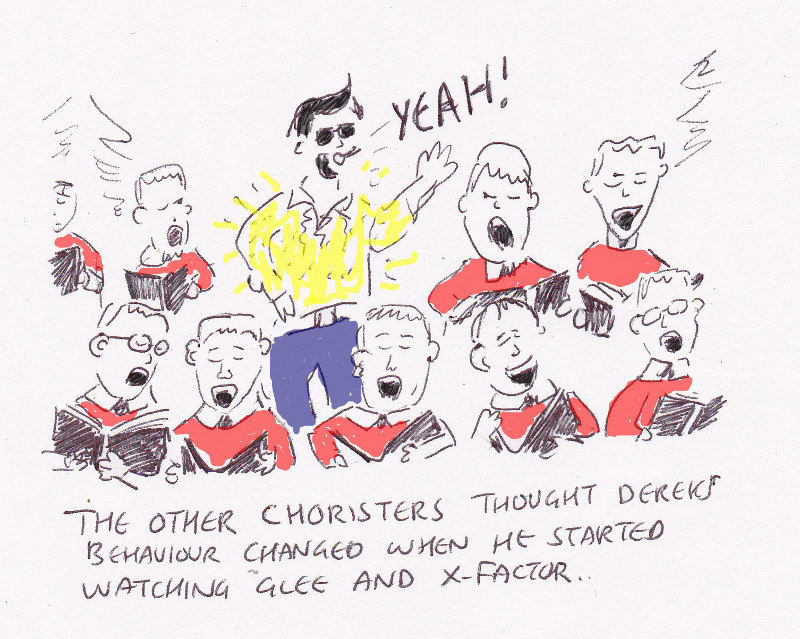 Todays advent cartoon about about Choral singers is a good example of a deadline cartoon, when you run out of time because of in this instance a busy day and Christmas card writing.or Writing Cards and you struggle for an angle and something witty to say.  The problem here is not the drawing it could have been refined more.  I had a couple of goes at getting those posh * mouths right and its ok.  No the problem is the concept/writing.    Last night I went with the first viable idea when somewhere in there is a better cartoon/caption even now I could think of something along the Kings Choir, Elvis the King line.  However you get tired, time is tight and here is where we end up.

It is easier to get away with bad drawing and good writing than vice versa.  Indeed cartoons like Dilbert are drawn very simply or the webcomic xkcd uses just stick people.  It's tempting to say (like some modern art) my nearly-four year old could draw that without realising there is a skill in saying more than less and I often have to resist making my work too arty.  No rather than Drawing I would be better working on my English.  So I'm covering up my questionable drawing with lots of English to make up for it.

* I write this with the words of one of my English teachers ringing in my ears pulling me up for using the word posh.  I received a lecture on the origins of this phrase from cruise liners apparently it stands for Port Out, Starboard Home which the upper classes preferred as that was where the shade was as the sailed to India.  My English teachers used to like my creativity but dispair at my speling and grandma.
Posted by idrew at 22:57