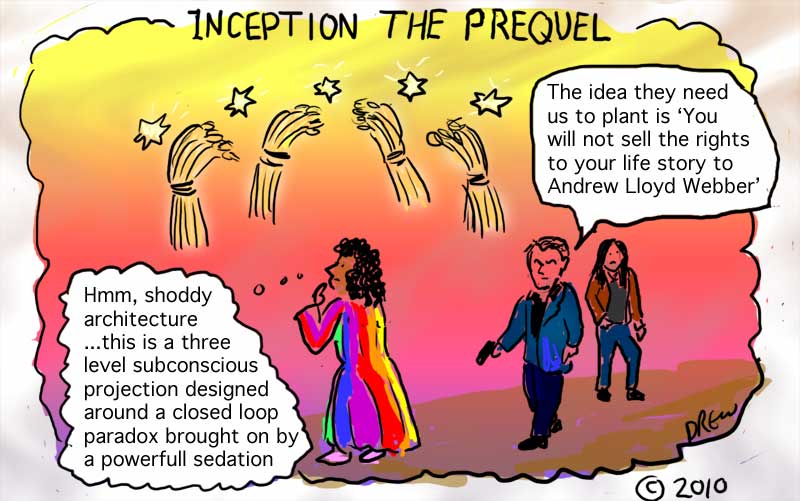 Todays cartoon is about Christopher Nolan's Inception and the`Biblical story of Joseph.  I watched Inception for the first time last night (yes it has been out for ages so this is hardly topical) and really enjoyed it.  This is despite certain work colleagues hyping it up since they saw it at the cinema.

Like the film this cartoon raises many questions and paradoxes.  Who wants to stop the production of Andrew Lloyd Webber's musical 'Joseph And The Amazing Technicolor Dreamcoat'?  I saw Lee Mead as Joseph in London and even though I'm a guy I quite liked this piece of musical theatre.  However for the purpose of this cartoon I needed a 'They'.  I thought of an evil corporation like Cobol who in the Inception alternative reality not only are behind one of the oldest programming languages but hire Cobb's team to try and prevent a rival company dominating the world's energy markets and charging old women too much for their winter gas supplies.  However I couldn't think of anyone so I left it a mystery like much of Inception. production.  Maybe it was Agnes of Cleethorpes who disappointed with seeing an understudy in the regional tour offered a junior Cobb a tenner to undertake his first job.  I'm sure the Internet will be awash with theories like those for Inception (heres a good summary of them).
Posted by idrew at 01:00