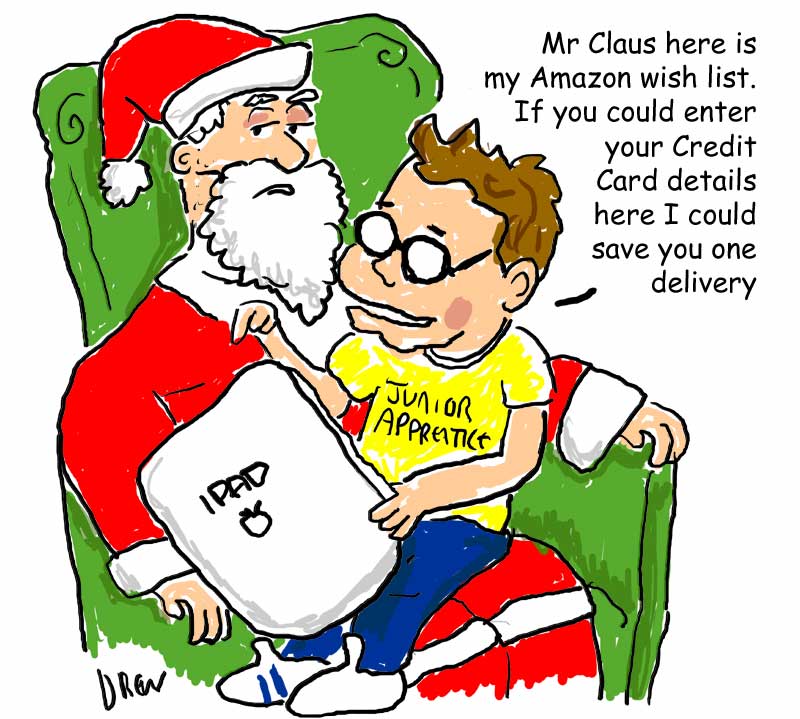 Prev
Why have no tech-savvy kids tried this?  They must have clocked the fact that Santa must be the richest man on the planet even though he appears at every shopping centre and kids party in variable quality of suit and beard.  Why he is a bigger entrepreneur than Alan Sugar who if he let his beard grow out a little could maybe pass as Father Christmas.

At this time of year there is much debate about the scientific plausibility of Santa's sleigh traveling round the world's infants in one night at either super-sonic speed without melting the reindeer or sub light speed where the almost glowing light from Rudolphs red nose will turn green due to special relativity. However we don't often consider the economic implications of Santa.

The richest man on the planet is Mexican Carlos Slim Helu worth 53.5 billion dollars (53,500,000,000) only slightly ahead of Bill Gates at 53 billion. According to UNICEF there are 2.2 billion children out of a global population of 6 billion. So if Santa spent * just 25 dollars per child (16 pounds) which wouldn't get you a Barbie doll never mind an iPad, he would have to give away as much money as the richest man on the planet is worth every year.

So where does Santa get his money from – is his selling the Artic drilling rights to the Russians or does he have a lot of credit? Maybe he is league with the Tooth Fairy who is probably dabbling in the derivatives and currency markets.

* I know Santa is meant to manufacture his own goods with his high-tech, minimum wage legion of elves but if you look at your children's toys then they are all made in China or Taiwan.

Also you could argue that Santa could economise by spending less on children in the developing world but due to inflation and consumerism the amount spent on kids in the richest countries is much more than 25 dollars.

Doesn't the naughty/nice list disqualify some proportion of the 2 billion children?  This is contraversial I know but I believe the naughty list is merely a fiction  invented by parents to rein in hyper kids in the advent period.  Do naughty kids ever end up with no presents on Christmas morning?  Furthermore do you ever see Santa turn away a kid at one of his grotto surgeries or inform them that they are too bad to get anything.

What about children that don't believe in Santa, are from other religions etc...   Come on it's just a silly blog posting.
Posted by idrew at 22:18