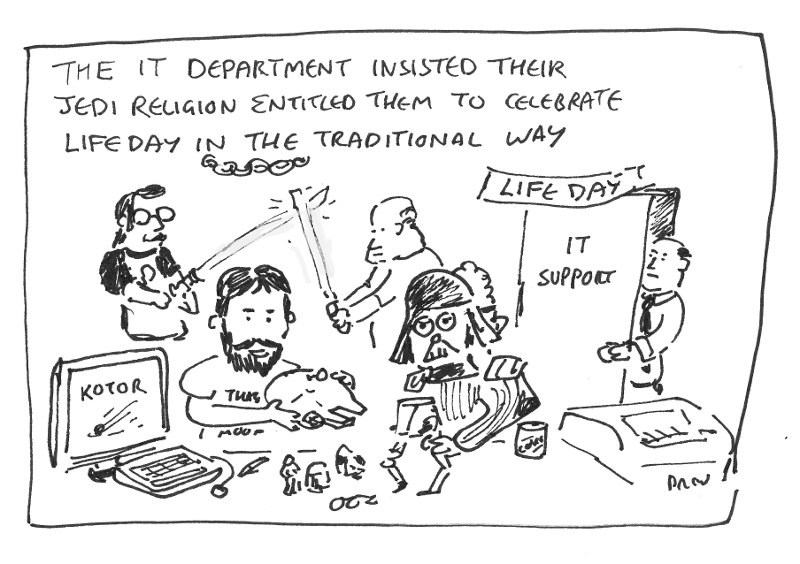 Happy Christmas!  Happy Hannukah!  Happy Winter Solstice!  Happy Holiday Season!  Have I left anyone out?  What about the 380,000 people who stated their religion as Jedi in the 2001 England/Wales census?  Surely as serious as they are in their beliefs they will want to be celebrating Life Day as first introduced in the infamous 1978 Star Wars Holiday Special.


Instead of a serious discussion of what constitutes a religion and what their rights should be in a multi-cultural society lets consider the different forms of religion debate in IT department.

Everybody knows Apache and My-S-Q-L
Help to make the website right
Firefox with its vixen logo
Will make it hard to surf tonight
They know that Sambas on its way
He's mounted LDAP, CIFS and printing on his K
And every MCSE is going to cry
To Gnome that Linux really has a G-U-I
And So I'm offering this simple phrase
To those who aren't propr-ietary
Although its been shared many times, many ways
A very Mono Linuxmas to you
Posted by idrew at 22:21

Email ThisBlogThis!Share to TwitterShare to FacebookShare to Pinterest
Labels: Christmas, IT, Star Wars